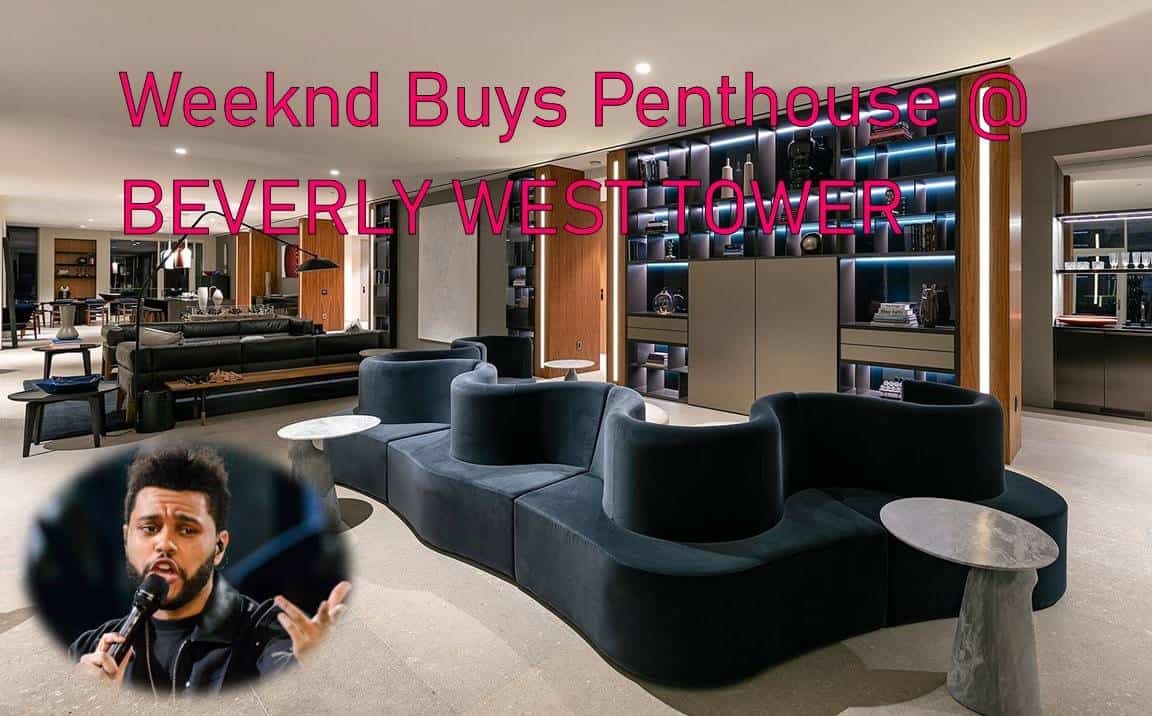 If you follow Los Angeles real estate, you’ll have noticed that one of the largest condo sales ever recorded in Los Angeles county – as well as the most expensive condo sale since Candy Spelling’s $35 million penthouse purchase in 2010 – happened recently.

Canadian singer Abel Tesfaye – stage name The Weeknd – purchased an 8,200 square-foot penthouse condo in the luxurious Beverly West complex. That amounts to just over $2,550 a square foot in a building whose HOA dues regularly amount to over $6,800 a month.

The Weeknd can afford this splurge. According to Forbes, the singer brought in $40 million this year and $90 million in 2017 from concerts, record sales and endorsement deals with brands like Bacardi and Puma. The Weeknd is no stranger to Los Angeles real estate – he already owns a modern estate in Holmby Hills (estimated value $18.2 million). But he’s spent his recent time in New York with then-girlfriend Bella Hadid, where he rented a four-bedroom triplex penthouse in Tribeca for $60,000 a month.

However, this purchase definitely takes the cake for Los Angeles living. The 8,200-square-foot condo, advertised as “The Mogul” unit, spans the entire 18th floor of the Beverly West building. The entire residence was designed by Lisa Gariss of Emaar Properties and features floor-to-ceiling windows, wide plank white oak floors by Cora of Italy and locally fabricated walnut wood paneling. Each of the penthouse’s four corners boasts a balcony to take full advantage of gorgeous panoramic skyline (and Pacific Ocean) views.

The master suite has floor-to-ceiling windows, a sitting nook, built-in bookshelves, a walk-in closet and even a home gym, so the Weeknd can work out in privacy. The large master bathroom is bedecked with marble and equipped with a freestanding modern tub and a bidet.

Each of the additional three bedrooms has its own en-suite bathroom and walk-in closet designed by MisuraEmme of Milan. The penthouse also has two convenient powder rooms for guests.

One full side of the building is a stunning great room, with luxurious amenities such as a full wet bar, a temperature-controlled wine vault, an espresso bar, a high-end entertainment system, a marble island with counter seating, a game area with a foosball table, lounging nooks and backlit built-in shelving.

The penthouse is decorated in a masculine palette of deep navy blue to compliment the walnut wood paneling. Select designer furnishings were also negotiated in the sale, including pieces from Giorgetti, B&B Italia, Armani Casa, Poltrona Frau and others.

“The Mogul” unit feels right at home in the jaw-dropping Beverly West building. The 22-story complex was built in 2009 by Dubai-based developer Emaar Propertiesand includes 35 units. Floors 18-22 are home to the complex’s single-floor penthouse units.

Besides the new, modern tower itself, living in the Beverly West is the epitome of convenience. The complex is located along the famous Wilshire Corridor, next to the Los Angeles Country Club and within a short distance of Rodeo Drive to the east and UCLA to the west. The building offers a fitness center, saltwater swimming pool, a rooftop helipad, a 24-hour concierge and 24/7 security services.

The Weeknd’s move from a 12,000-square-foot, 9 bedroom, 11 bathroom mansion to a penthouse unit in a tower isn’t all that shocking. In fact, it echoes a trend that many are embracing. With high-rise living, residents who don’t want to own a house or live entirely on their own are able to enjoy communal living and amenities while also enjoying the privacy offered by a single-family home. The Beverly West only has one shared amenities floor; when residents want to go straight home without interacting with others, they are easily able to do so.

Right now, luxury high-rise buyers tend to be younger, trendier and more artistically inclined, such as Rihanna, who sold her Pacific Palisades estate and moved to a condo atThe Century in Century City. But as the population increases, vertical living is sure to grow in popularity.

Bill Simpson, Jeff Hyland and Susan Pekich of Hilton & Hyland brokered this deal for Emaar Properties, and Angel Salvador of The Agency represented The Weeknd. Interested in learning more about vertical living, or a property in Beverly West?