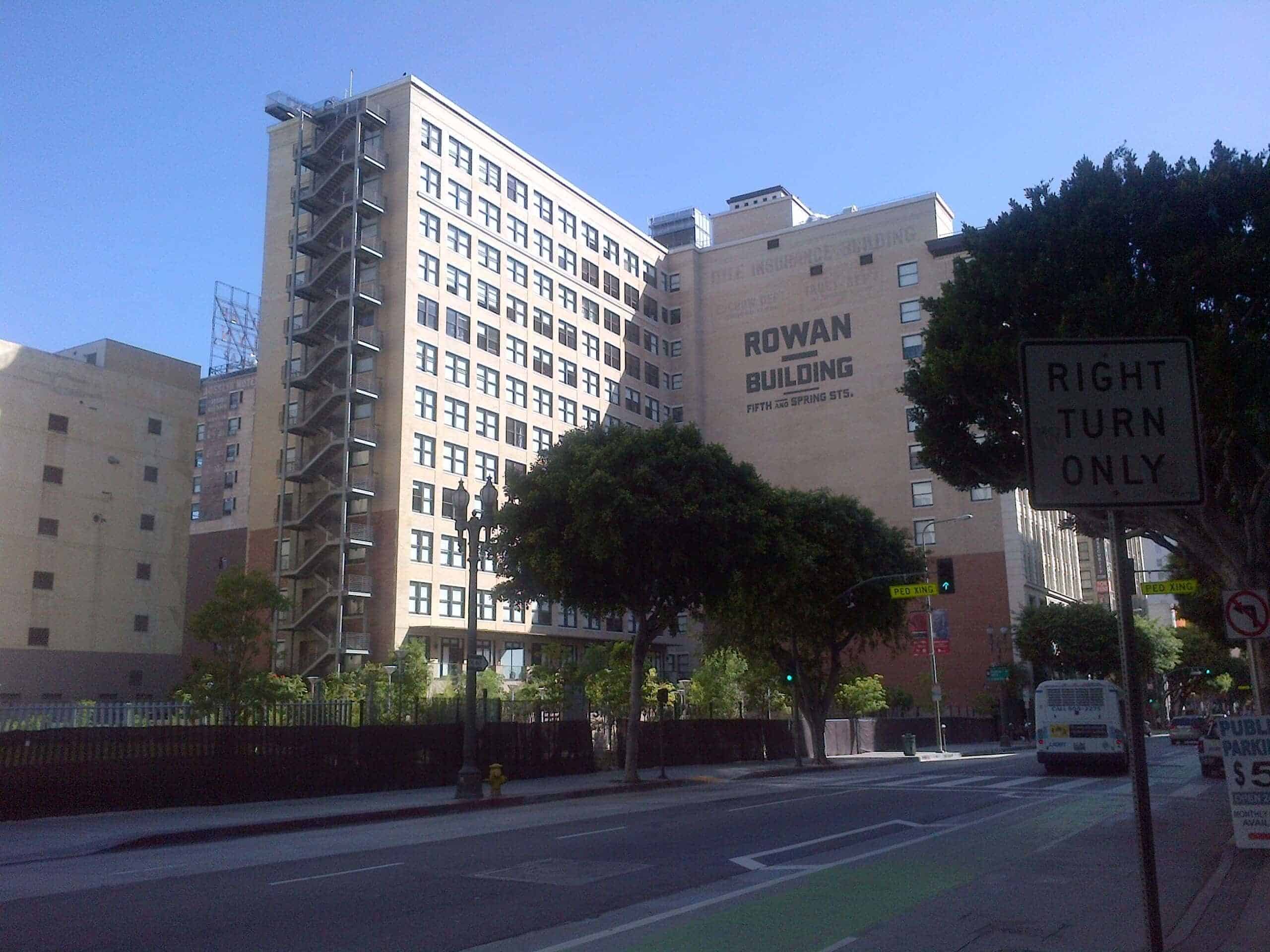 Rowan Lofts is located in the old bank district of downtown Los Angeles on the northeast corner of 5th and Spring. This area of Downtown is relatively safe and walk-able- there are several great restaurants, bars, and shops within a 5 minutes walk from Rowan Lofts. You have plenty of options for where to grab a bite to eat, or venues to choose if you want to have a night out with friends from the bustling after dark scene. Check out nearby Buzz Wine Beer Shop which has regular tastings, or the last bookstore across the street. Rowan is right in the middle of the action during the monthly downtown art walk. 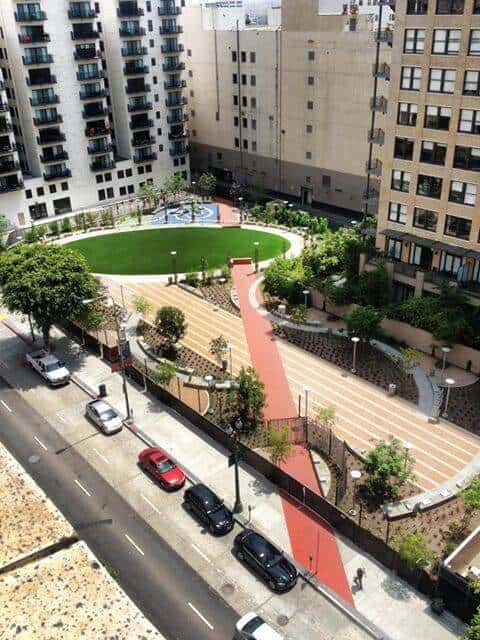 Spring Street Park is next store! Spring Street Park is  0.7 acres and cost $8M to build. The park includes a walking loop, a grassy lawn, and a kids play gym for local residents to enjoy. Rowan faces its sister building to the north El Dorado lofts. Additionally this location is two blocks from Metrolink and short walk to downtown’s Sunday Farmers Market. 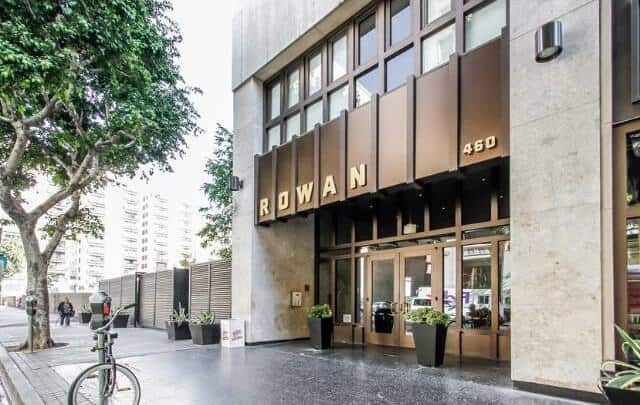 Rowan Lefts is a condo conversion project that transformed office space into residential lofts. The conversion was completed in 2008.  There are 206 units on 12 floors.

Circa 1912, Rowan lofts is sure to please buyers looking for a Historic downtown Los Angeles Condo. The original character of the building was kept intact when modernizing it. Units offer all the modern creature comforts we are accustom to –Central heat/air conditioning, New Kitchens with Scavolini Cabinets, in unit stackable washer/dryer (European style ventless machines), Bosch dishwasher with hidden panel, and recessed lighting. 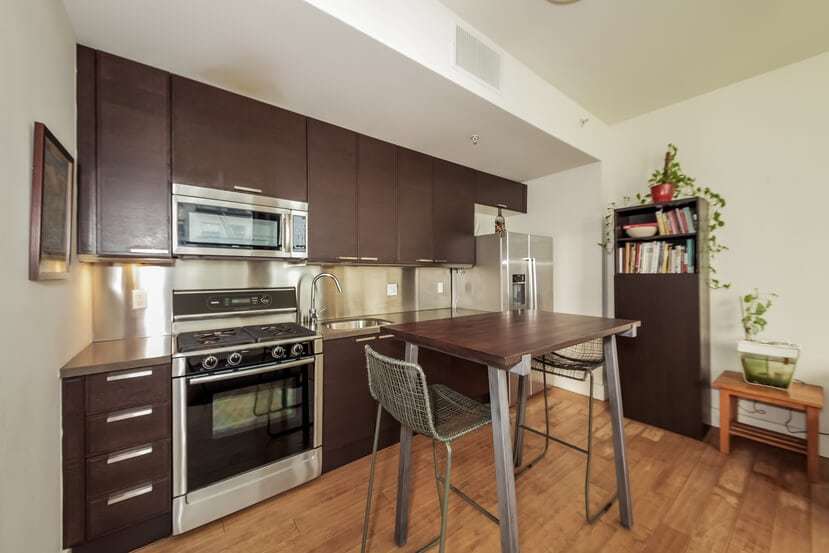 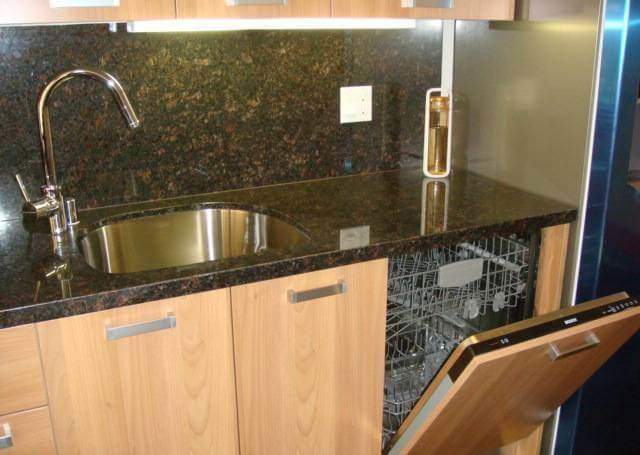 Watch Video of the Restoration work!

Meanwhile, the developers revitalized the copious amounts of carrera marble that festoons the floors and walls of the lobby and hallways. This marble is the same marble in the Vatican! 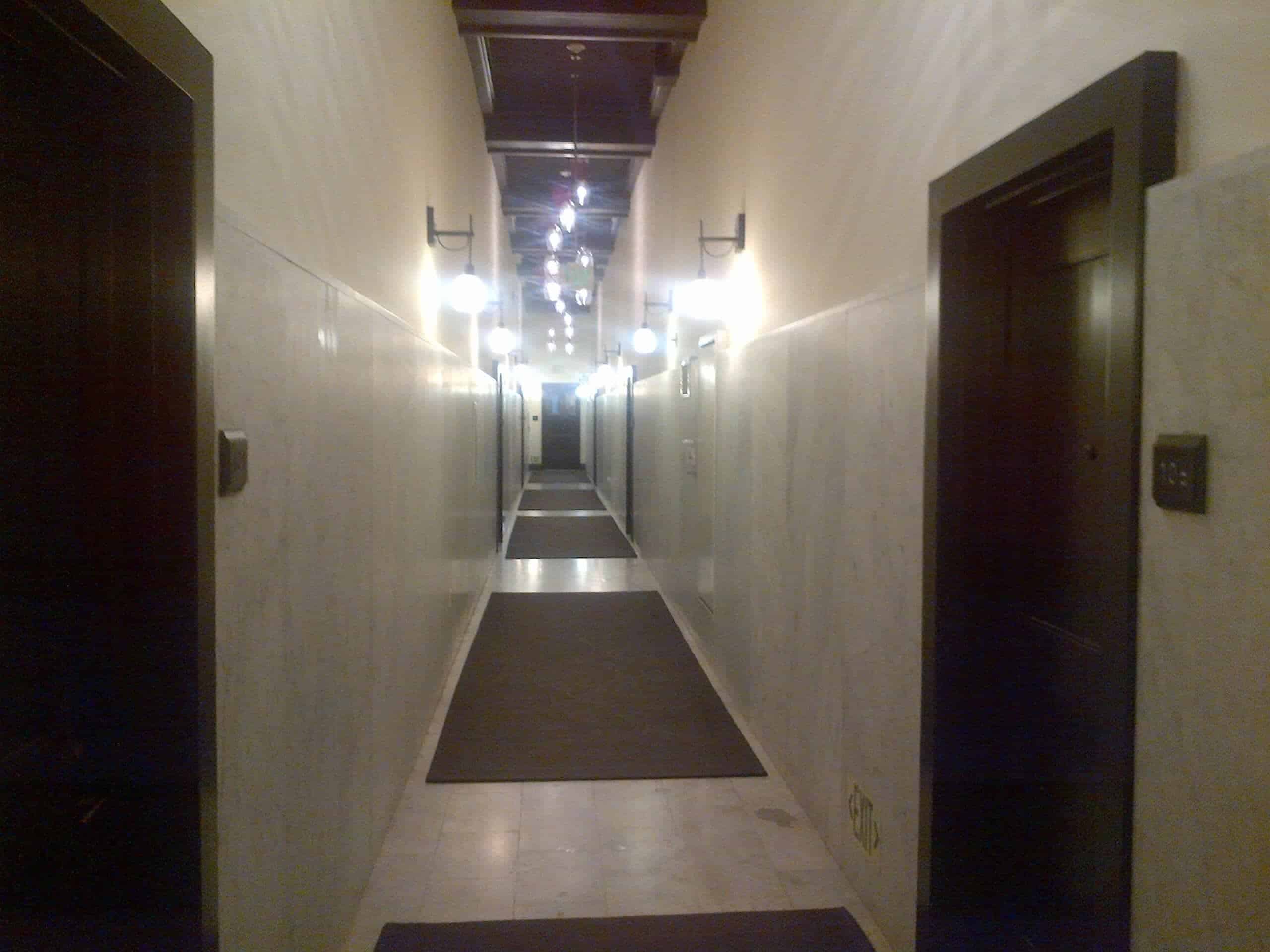 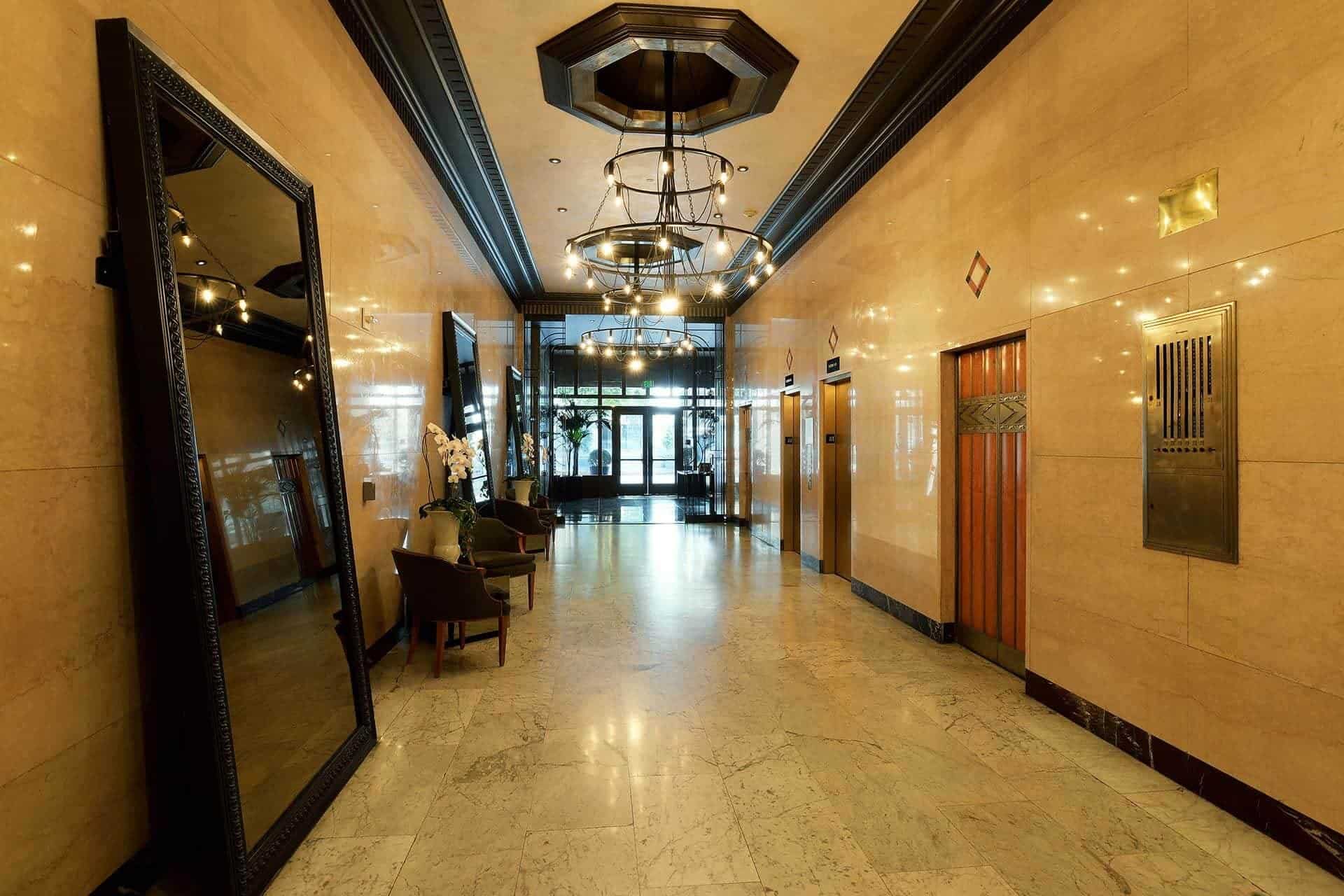 I love the nickel and silver detailed Art Deco Elevator Doors in the Lobby that were preserved! They don’t make them like that anymore. 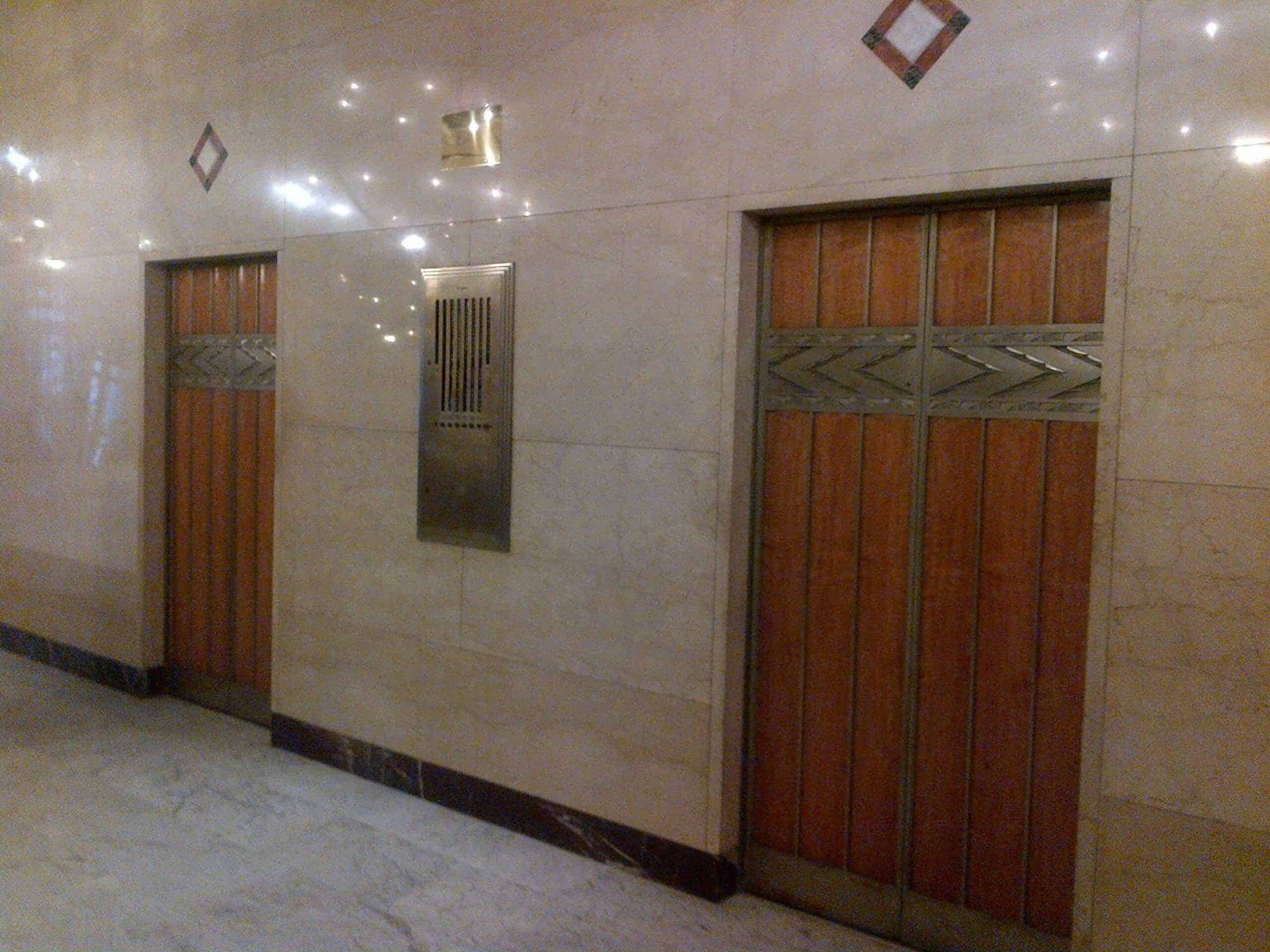 They kept the copper and brass stair case banisters. 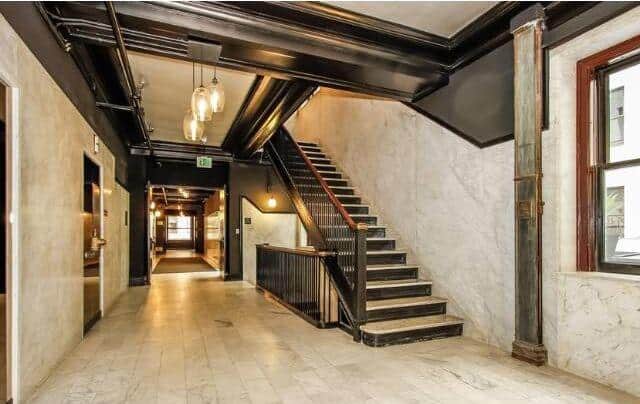 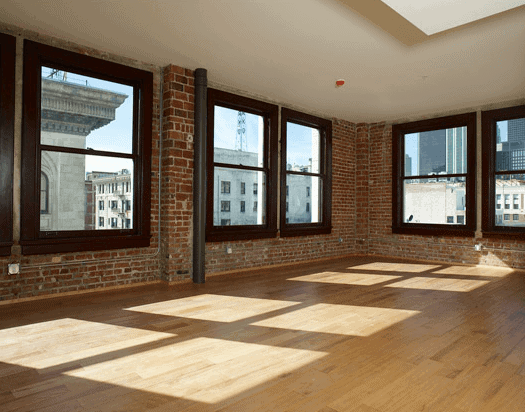 These lofts were built with quality. $7,500 worth of sound insulation went into every unit. They have 1 inch of sound proofing in between the floor, insulation in ceilings and walls and there are double walls between units. The building was reinforced with steel and concrete to make the building earthquake safe. 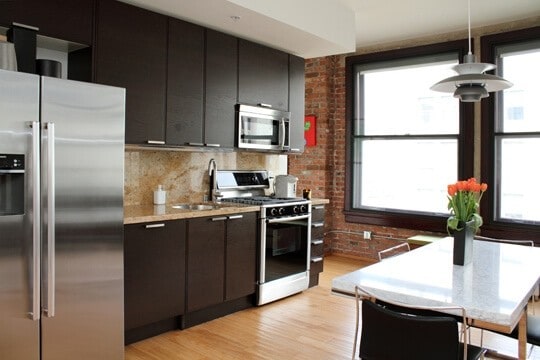 Exposed brick walls lay the perfect backdrop for decorating, and preserve an historic urban feel. Ceilings are 10 feet high on most floors, making these units feel extra spacious. The floorplan are true loft style, completely open, the bedrooms do not have walls. This flexible space gives owner total freedom to imagine how they want to arrange their space. Some owners prefer to enclose their bedrooms, they have accomplished this in a number of imaginative ways.

Spring is one of my favorite DTLA streets. During the first fifty years of the twentieth century, Spring Street was a-chatter with the hustle and bustle of financial boom town- Los Angeles. Rowan Lofts is one of 23 historic financial buildings that are the old bank district. Many of these historic early 20th century commercial building are going through conversions for residential use.

The Rowan building  was designed by famous LA architect John Parkinson and G. Edwin Bergstrom. Parkinson designed 10 buildings in the bank district, as well as iconic LA buildings such as the Memorial Coliseum, City Hall, union station, and the Alexandria Hotel kitty corner across the street. 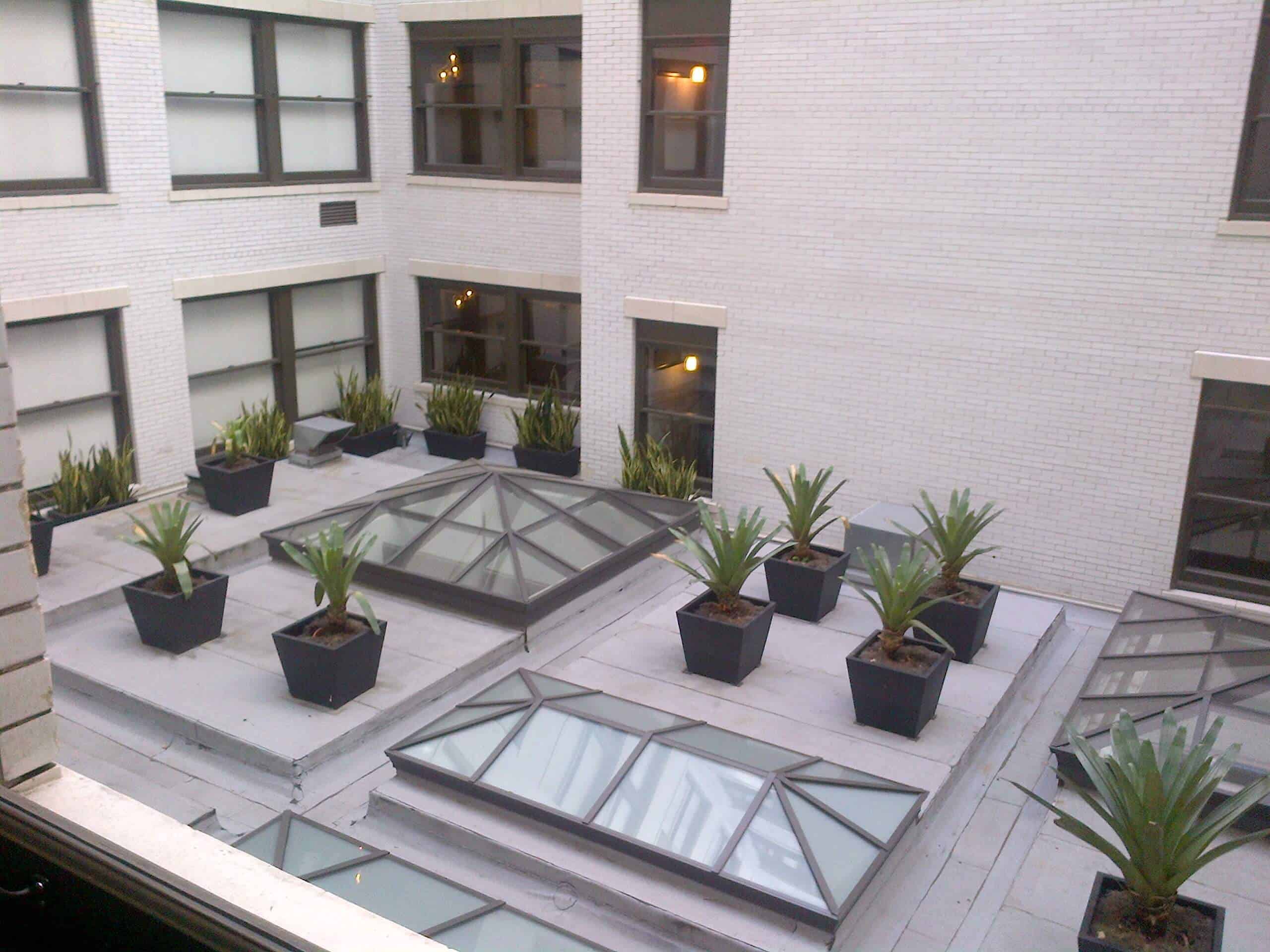 Rowan is a Courtyard style building. There is open space in the center lets light filter in from the sky inside and you get airy feeling halls. 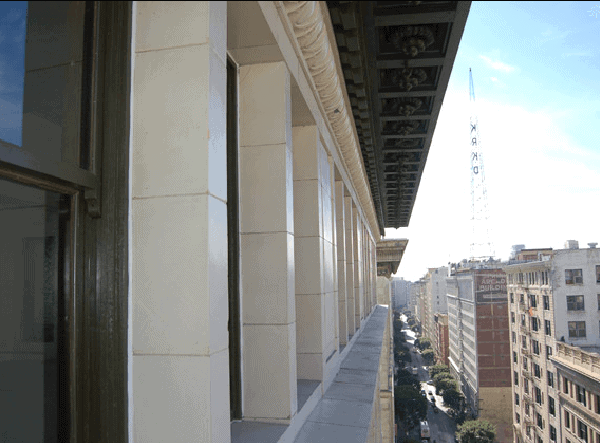 Rowan is a beau arts style building clad in brick and terra cotta facade. The cornices are intricate with floral and egg and dart patterns, and there are ornate cast iron rosettes that hang. 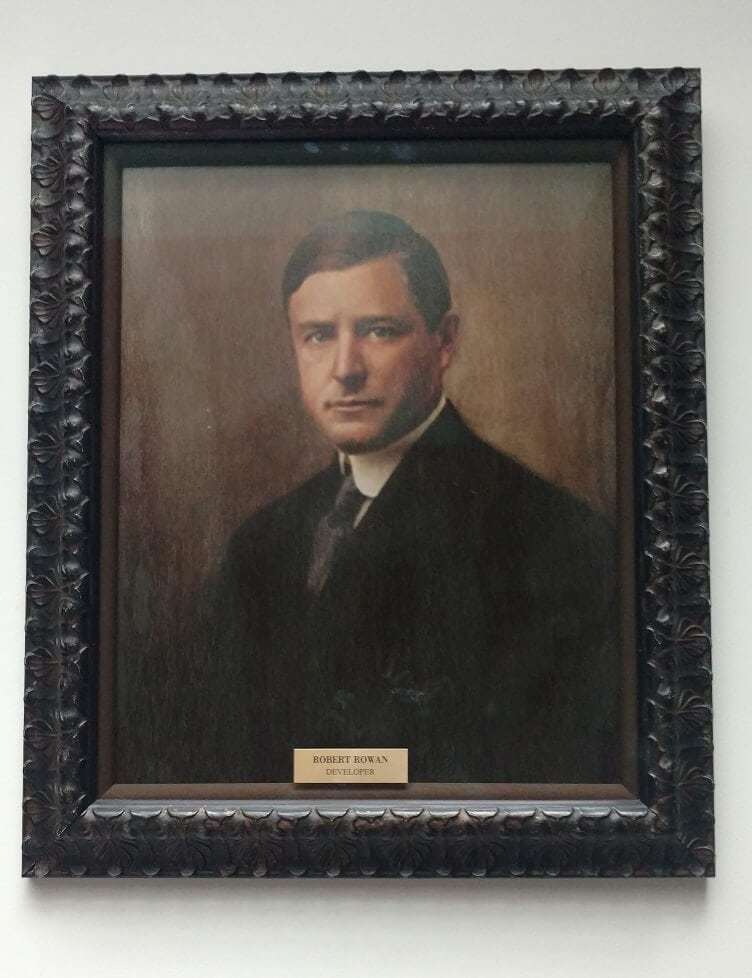 The Rowan gets its name from its famed builder, real estate developer Robert A. Rowan [1875-1918]. Rowan was a second generation developer, his father George Rowan was one of the pioneers of development in Los Angeles. George owned a large portfolio of properties on Broadway which at the time was called Fort Street. Rowan began his real estate career at 22, first working for William May Garland for several years before going on his own in 1901 and later forming R.A. Rowan & Company with a few of his brothers in 1905.  Robert came from a family of eight and he had five brothers and two sisters.

R. A. Rowan & Co. did an enormous amount of building downtown.  They are responsible for the Alexandria Hotel, the Los Angeles Athletic Club, the Rosslyn Hotel, the Security building, Merchants National Bank Building, the Title Insurance building, the Title Guarantee Building and a number of other historic buildings downtown. Rowan  also developed the residential community of Windsor Square (approximately 200 acres).

At the time Rowan was built, it was an office building and housed some of Los Angeles’s most prestigious law firms and stock brokerages. Like many buildings in the historic core, the Rowan fell into disrepair. Goodwin Gaw, President of Downtown Properties saw an opportunity to create this unique urban living environment.

Rowan Lofts offers residents some really nice amenities. There is a 24-hour front desk which is great for security, the lobby has a receiving area that is simply jaw dropper! Great for creating impressions. There is a residents lounge with kitchenette, Flat Screen TV, Wifi internet, and Mens and womens bathrooms on the 2nd floor that can be reserved for gatherings and private parties. No comment on interior design choice for the chains hanging from the walls… 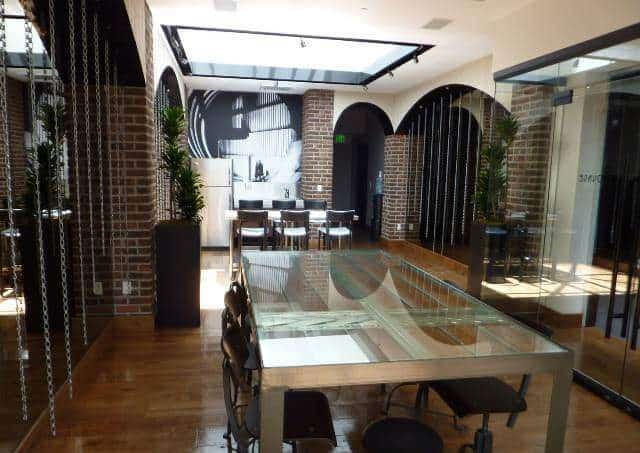 And there is a patio area with two built-in gas barbecues, tables and chairs, and a hot and cool spa. 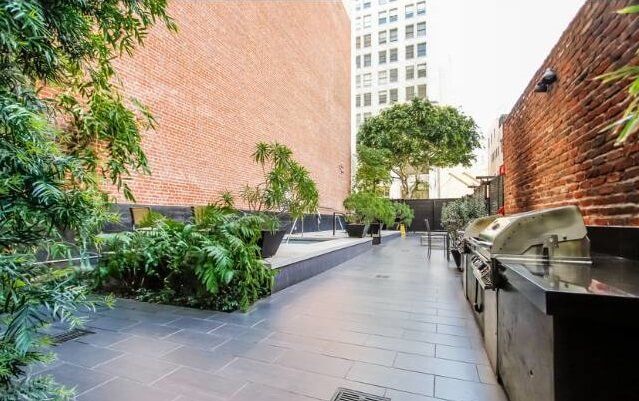 There are few decorating ideas to consider when furnishing your new Rowan loft. The first is in the kitchen. Some owners like to have a rolling island to increase counter space and add extra storage: 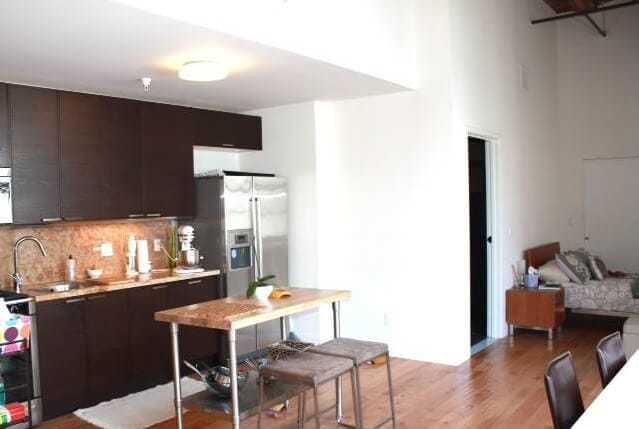 while others choose a formal dinning room table. 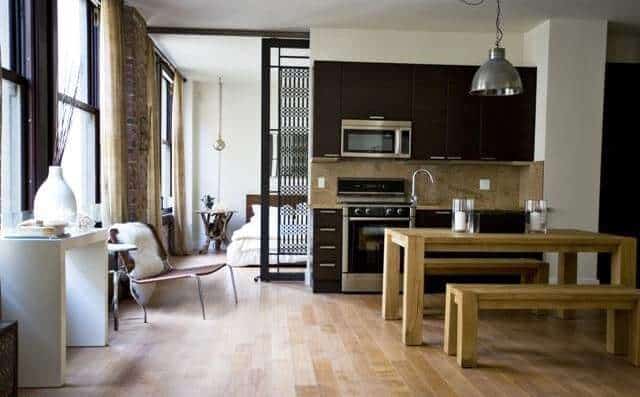 Many of the floor plans in Rowan have an open bedroom. If you wish to enclose the bedroom for more privacy many owners use a room divider, wall, curtain or other means to do so.

There is No EQ insurance

HOA do not cover- Elec., Cable, or internet 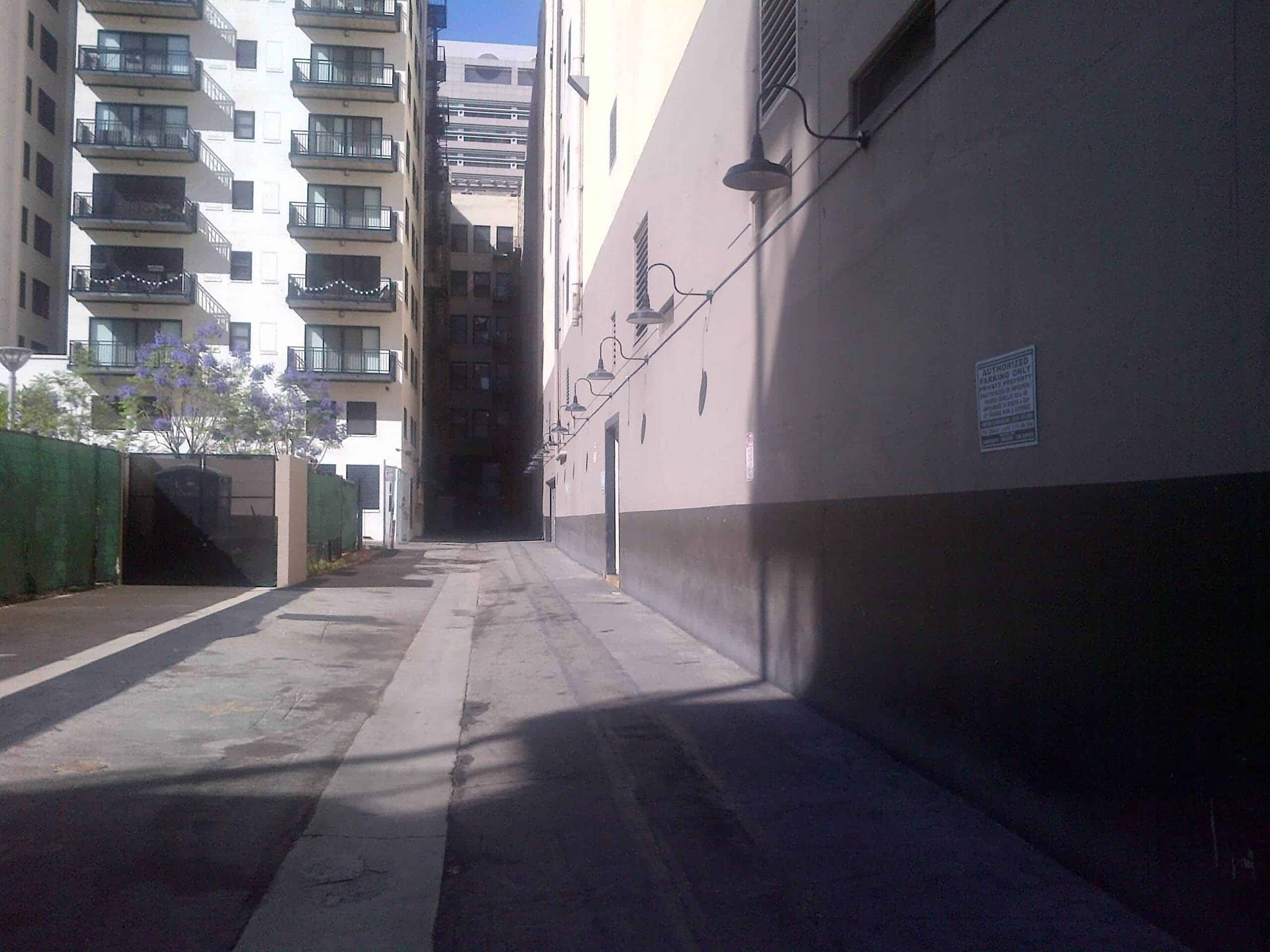 Parking isn’t ideal (as is often the case Downtown), but it works. Parking is not deeded. Rowan lofts purchased the exclusive right for its owners to park in the garage next store forever. Owners cross an ally that is closed off on both sides to the parking garage. Owners have the choice to rent a Parking space in the garage next store if they want. Parking is additional cost on top of the HOA dues. You may choose to pay $175/ mo. to have an unreserved parking space, or $225 /mo to have a reserved space, or $325 for Tandem reserved.

Some general advice, when you are viewing a unit in Rowan or anywhere downtown. Be careful parking on the street! you may get towed if you are outside of the allowed parking hours (even if there is a meter!), parking in a lot ($10-$15) is a small expense, and it can save you from having a nasty surprise when you are done with the showing.