The Norma Triangle is a quaint residential neighborhood nestled in an out of the way area of West Hollywood. There are charming 2br and 3br bungalows…? 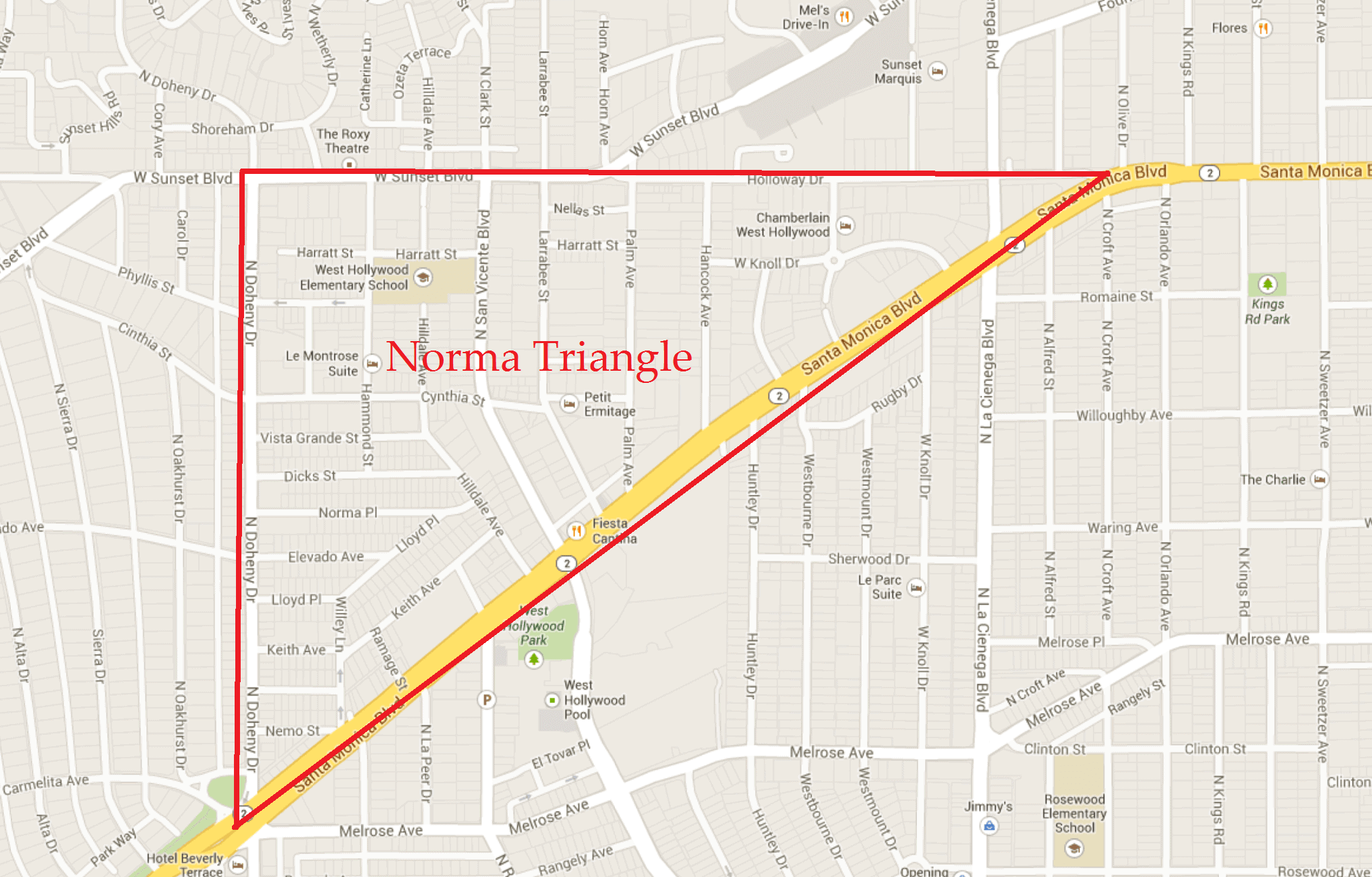 Norma Triangles is bordered by Sunset Boulevard to the north, Doheny Drive and Beverly Hills to the west and Santa Monica Boulevard on the east and south. Norma Traingle is perched on the Santa Monica Mountain foothills and has a slight upward incline that levels off at Sunset, before going up again into the Hollywood Hills.

Norma Traingle benefits from having all the great culture, entertainment, dining, nightlife and shopping that West Hollywood has to offer but is separated from it for those who value their peace and quiet and want privacy. It is also a real neighborhood- where many of the owners stay for a long time and get to know one another.

Known for being very walker friendly, Norma Traingle has sidewalks on both sides of the streets albeit the streets are narrow- that’s ok, because there is so little traffic you can just walk in the street. It is common to see a neighbors taking a walk, or walking their dog. 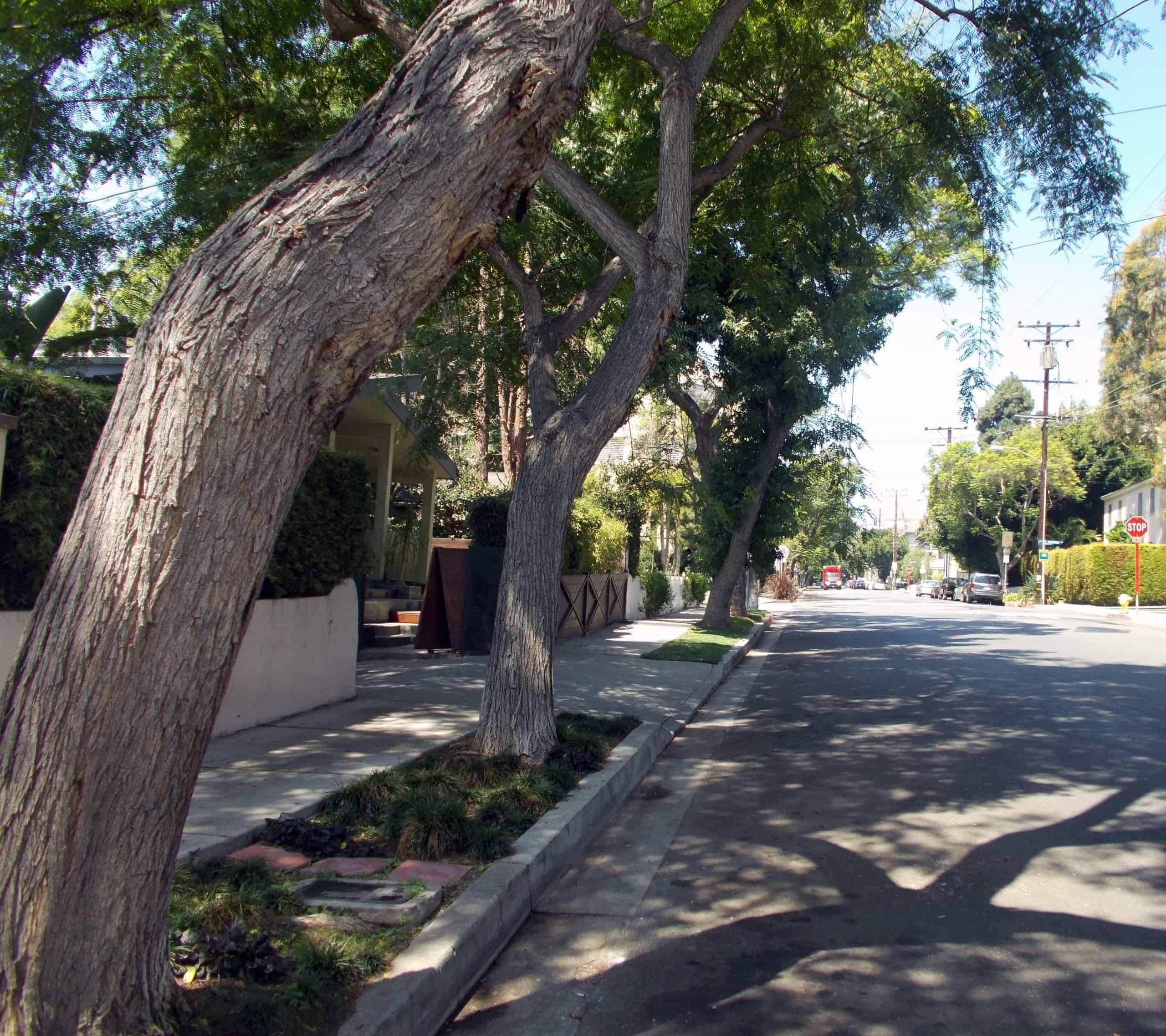 The celebrated West Hollywood Pavilion’s a minute away, so its perfect if you want to wander down and grab something from their phenomenal deli/sushi counter.

People who buy Norma Traingle are house people- they want to live in a house, with a back yard (some Norma Triangle houses even squeeze in a pool), but do not need or want a large house to take care of. 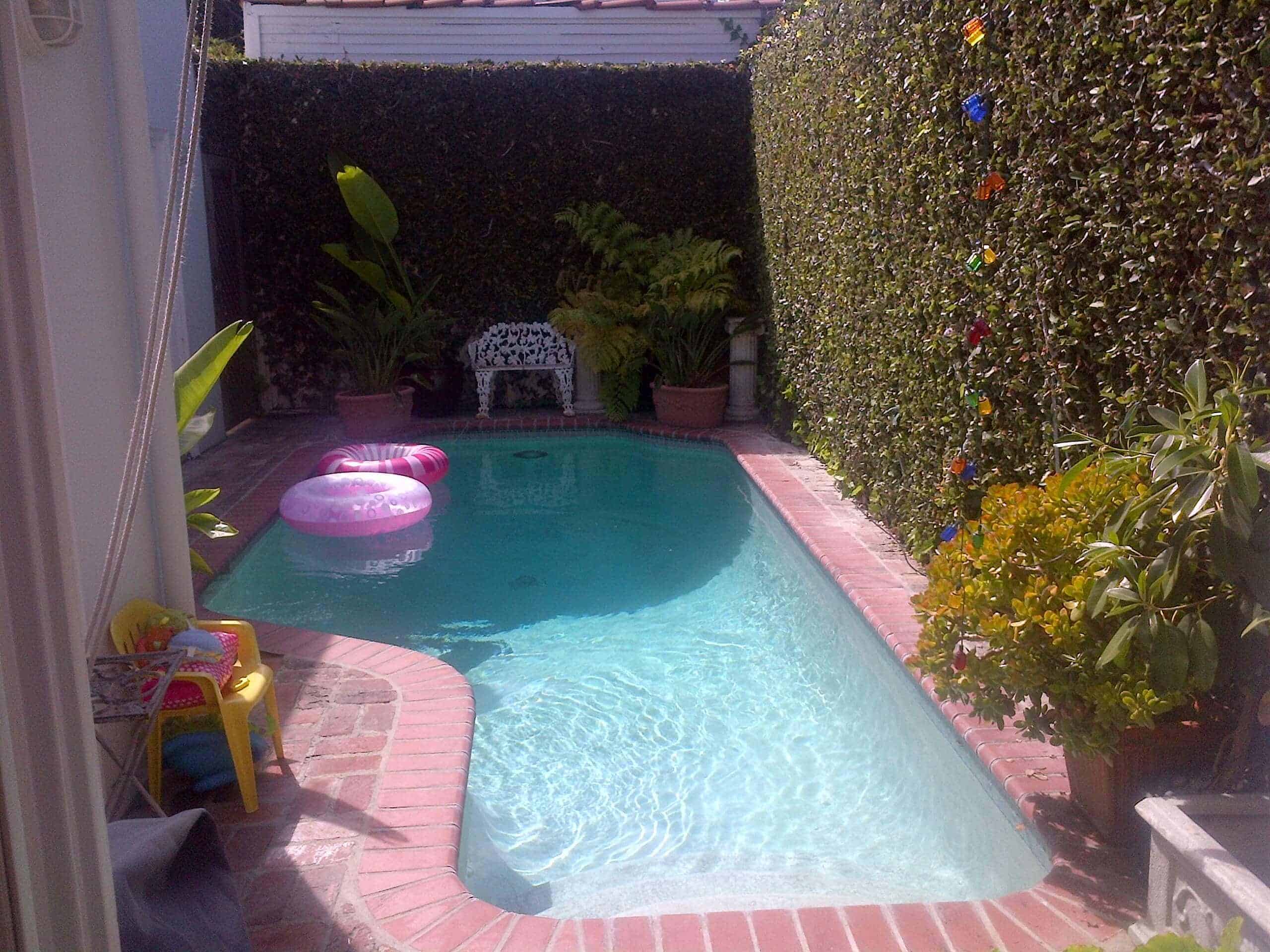 Norma Triangle houses are reasonably priced considering the area, and upkeep is at a minimum. In Addition, a lot of owners really enjoy putting their own personal touches altering or remodeling their homes and taking advantage of all the great West Hollywood based local designers- the Norma Triangle has a long history of this.

Because of the size of the houses, the Norma Triangle tends to attract single professionals, couples, and small or young families. Big families may find they need more space. 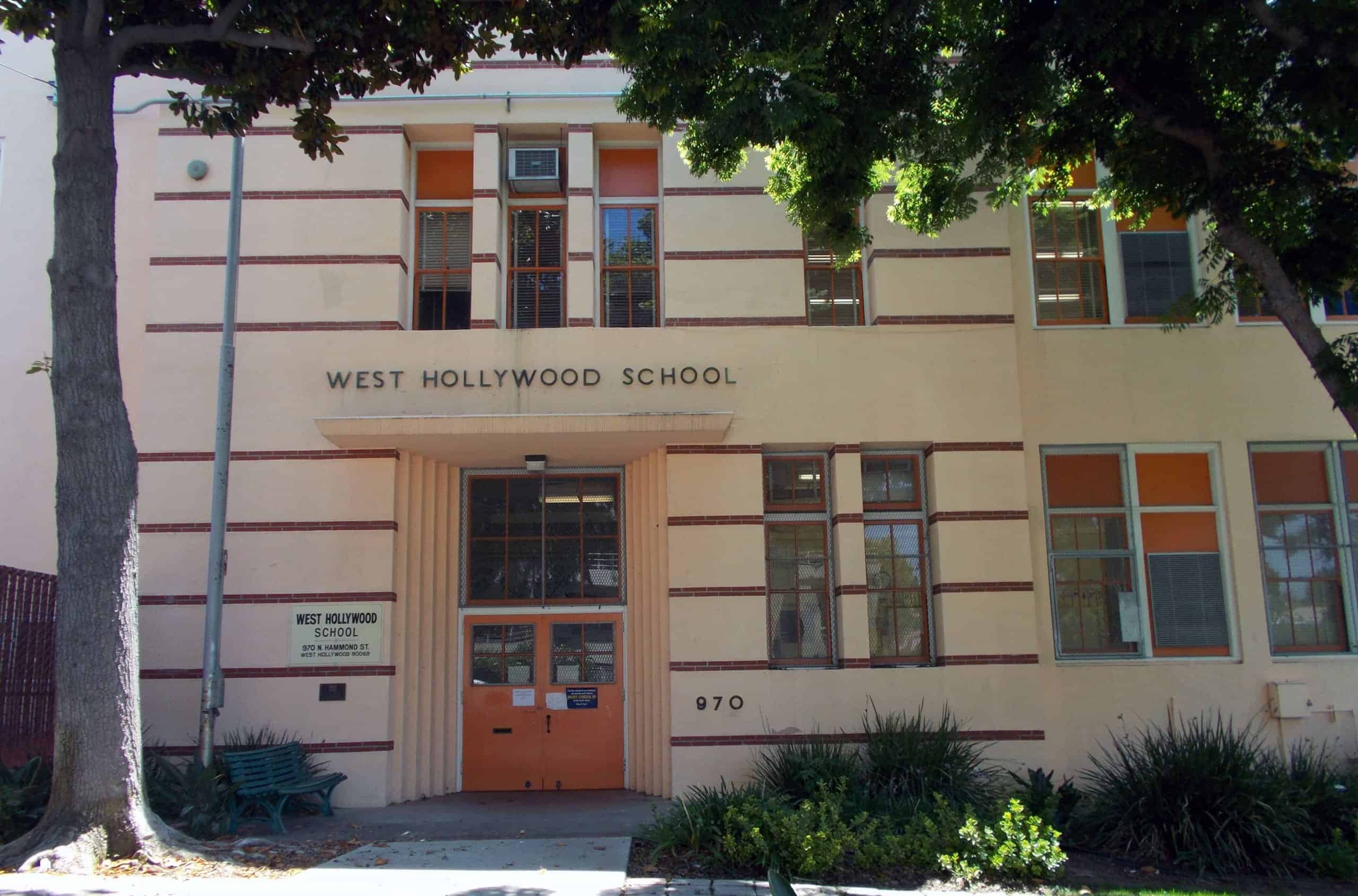 Le Montrose Suite Hotel, Petit Ermitage and the Chamberlain Hotel are all located within the boundaries of the Norma Triangle. These boutique hotels are great for pampering your out-of-town guests.

Trader Joe’s (8611 Santa Monica), and Whole Foods (7871 Santa Monica Blvd) supermarkets are nearby, as well as Equinox Gym (8590 Sunset Boulevard). Fire station #7 is located on San Vicente in case of an emergency, and West Hollywood is well known for being safe. 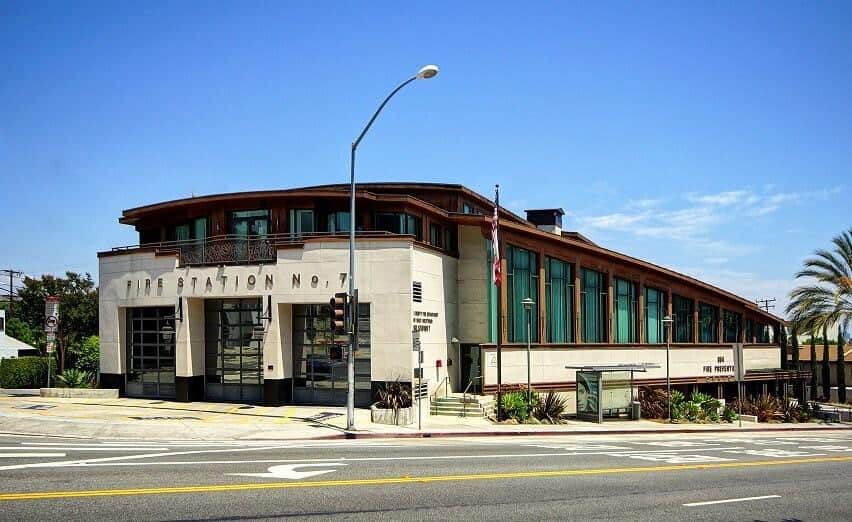 About the Norma Triangle

Norma Triangle is West Hollywood’s oldest neighborhood and its creation harkens back to West Hollywood’s beginnings as a railroad town. Because of West Hollywood’s central location and cheap land the Los Angeles-Pacific Railroad Company selected it as the ideal site to construct their new railway yard and power plant. 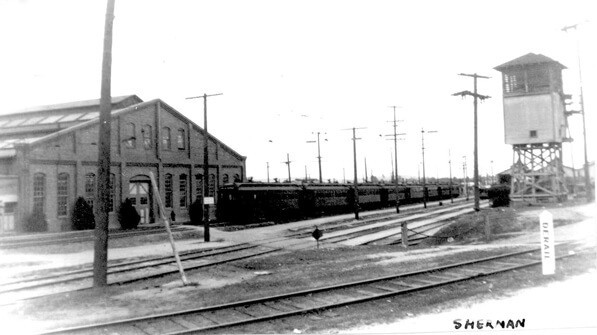 Buildings in the Sherman yard included two car houses that could store 50 cars, an iron foundry, blacksmith, powerhouse, and a carpenter shop. 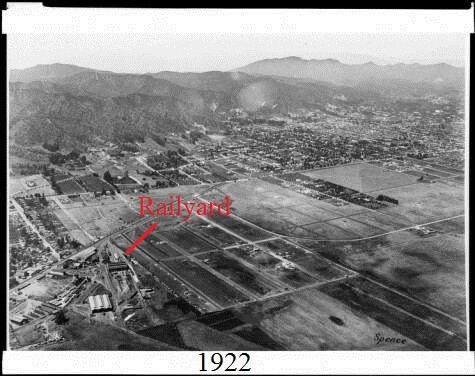 In the Aerial photo taken in 1922 above you can see on the top left just a little bit of Norma Triangle as well as the rail yard. 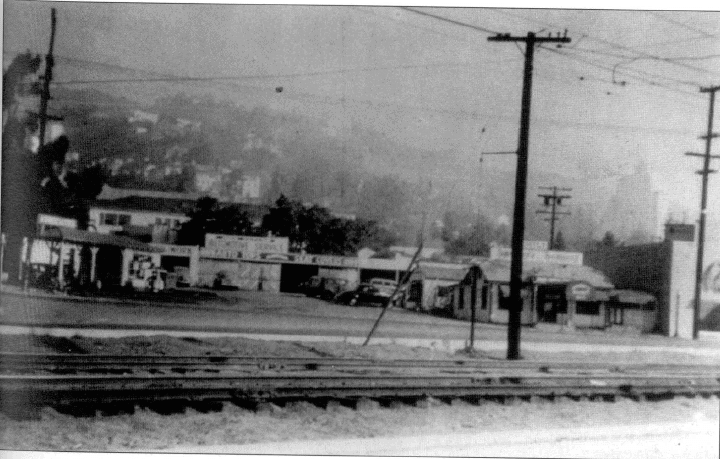 Barneys Beanery on the far right, been in the same location since 1920

Sherman Station was demolished 1955 as the convenience of cars made railways obsolete. Sherman Station occupied the space that is present day the Los Angeles Rapid Transit District terminal, the sheriff’s station, and the Pacific Design Center.

A small town sprouted around the railroad station. and land was needed to house the engineers, railway workers, carpenters, conductors, and maintenance crews who worked there. Chief Railroad Engineer W.D. Larrabee and W.H. White purchased a 12 acre parcel from T.H. Quints who owned a barley field north of the railroad yard. The parcel was large enough to build a hundred homes. The first residential construction in West Hollywood began between 1896 and 1910 in the Norma Traingle. The oldest house in West Hollywood is located 825 Larrabee St built in 1898.

Here are some other really old West Hollywood Houses that haven’t been altered too signifigantly over the years:

The first streets laid out in West Hollywood were Larrabee, Clark (now San Vicente), Cynthia, and Sherman (now Santa Monica Blvd). Many historians think that the street names in the Norma Triangle were actually named for the children or spouses of the LA Pacific Railroad Company employees. 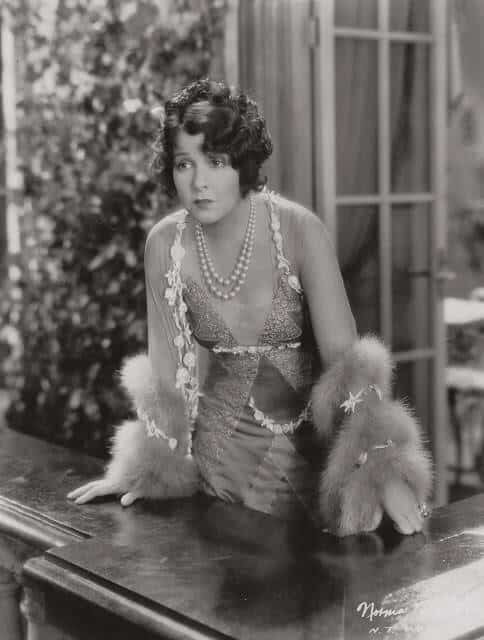 There are 282 homes in the Norma Triangle. There are some Norma Triangle condos sprinkled in the neighborhood as well as a few high rises on Doheny. Most Norma Traingle houses are on the smaller side. Norma Triangle Residents don’t care about the size because they buy the neighborhood. In addition, the houses tend to be extremely done because owners load them with improvements remodeling. The square footages of Norma Triangle houses range from 1,000 square feet to 1,500 square feet in size. They often feature two or three bedrooms and occasionally just a single bedroom. The lot size come in between 3,000 – 4,000 square feet which is less than the standard R1 zone conforming lot size of 5,000sqft (50’x100’). Most of the houses were built in the wave of the area’s first development between 1910 and 1930 and remain intact albeit considerably altered.

The Mature growth trees wrangle with the city street for preeminence in the Norma Traingle Streetscape. Sidewalks line either side of the public right of way, and are conducive to dog walking, or talking a stroll.

Mature tree lined streets provide shade from the overhead canopy so walking during the day is cool. Most streets have sidewalks on each side of the street. Street lights light the street during the evening.

Remodeled Spanish houses, which were out of style during the 70s with Regency.