Who Was John Elgin Woolf? 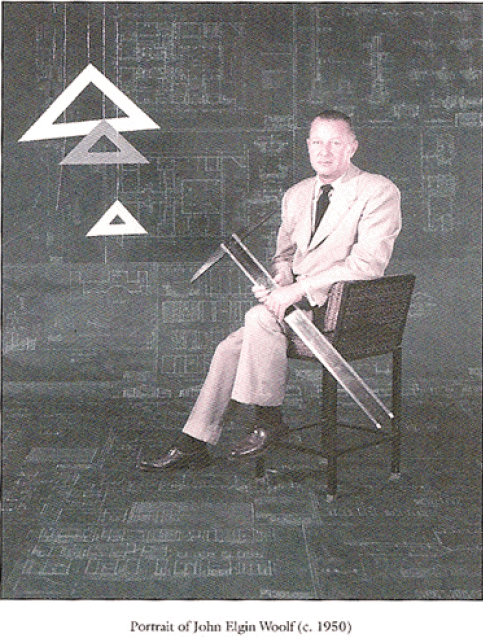 John Elgin Woolf was an architect to the stars, with much of his work being done for celebrities. He built houses for Judy Garland, Cary Grant, Mae West and Bob Hope to name a few. His projects were mainly centered around Bel Air and Beverly Hills areas.

I find it surprising that more isn’t published about Woolf when so much has been written about his contemporaries. I think this is partially due to the fact that Woolf was never licensed as an architect, although he graduated from the Georgia Institute of Technology in 1929 with an architectural degree.

Since Hollywood Regency draws inspiration from classical sources of architecture such as Beaux Arts, French and English Regency periods, and then strips it down- perhaps purists feel that Hollywood Regency is watered down and not legitimate. After Woolf’s passing, his partner Robert Koch, made a huge donation to USC’s Museum of Architecture, which now houses over 2,000 of Woolf’s personal and professional items in their collection, including watercolor drawings, photographs, and designs. The collection also has manuscripts containing correspondence between the firm and many of their celebrity clientele.

John Woolf was prolific – his firm was active from 1940-1980 and in that time he completed approximately 300 projects. John Woolf project history.  He specialized in remodels and new construction. Woolf houses sell extremely well and are much beloved by their owners. They are comfortable and possess great livability. Woolf knew how to cater to his audience and created glamour and Drama with big dramatic entrances, large living rooms with floating fireplaces, lavish outdoor pool and lounge areas with pavilion. Many hallmarks of the Hollywood Regency designs are quite theatrical, just like the town they were built in itself.

Growing up in Atlanta Georgia, Woolf was surrounded by many beautiful Beau- Arts houses. After he graduated college, Woolf worked for the National Park Service in Georgia between 1934 and 1936 and carefully studied surviving classical revival antebellum residences. On a visit to New Orleans in 1936, Woolf was particularly impressed by the architecture in the city’s historic Vieux Carre and Garden districts and dedicated himself to master the details behind classical period revival designs. During the time that Woolf was producing his Hollywood Regency houses, post World War II, many of his fellow architects were producing modern houses like the case study houses. Woolf’s houses followed a traditional model. There are a couple design features that define Hollywood Regency:

The most instantly recognizable feature of a John Woolf Hollywood Regency design is the out of proportion Pullman style doorway that interrupts the roofline.  The first known example of a Pullman style door was in Woolf’s own Melrose Place offices (8448 Melrose Pl). 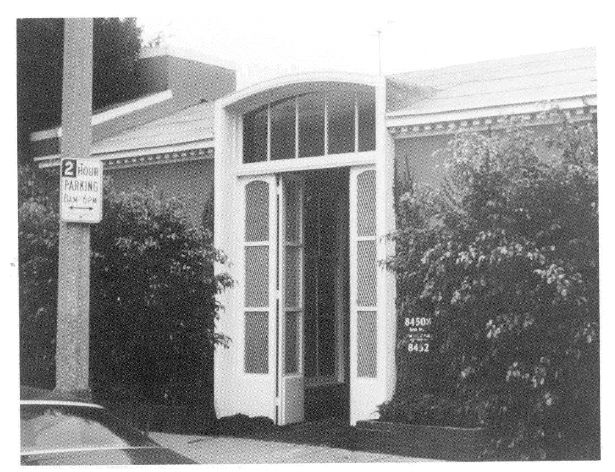 John Woolf Opened his office at 8450 Melrose Pl in 1946. This was the first time Woolf used his Pullman Door surround, which rises just above the roof line. 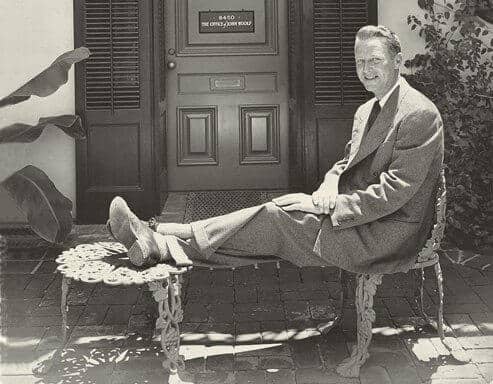 John Woolf sitting in front of his offices- you can read the address 8450 behind him on the sign. 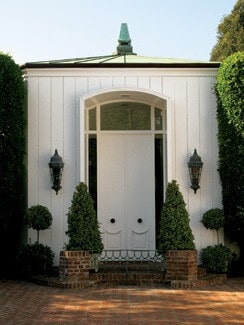 This is an example of a Woolf Pullman door similar to his office. 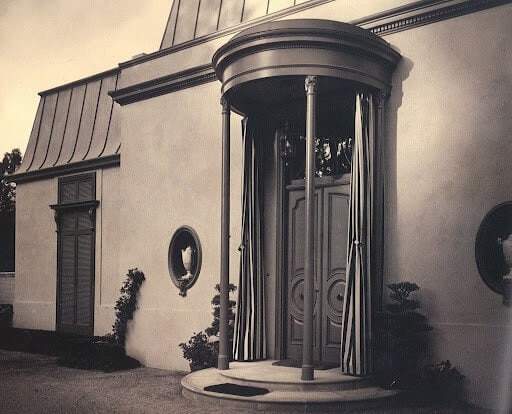 One of JW’s most famous houses, the pendelton residence 1032 N Beverly Dr 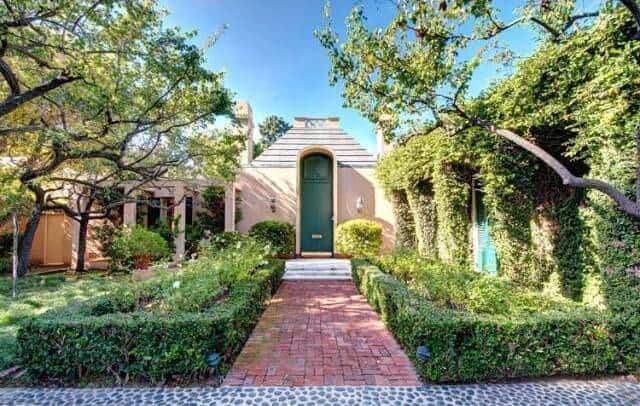 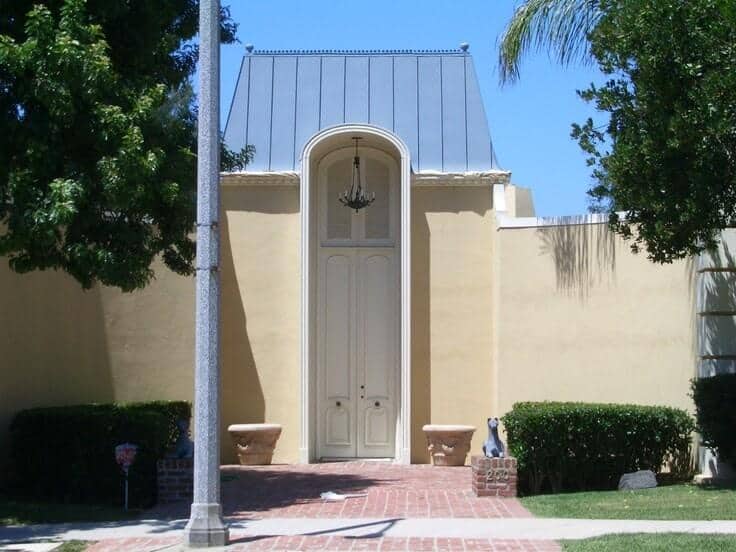 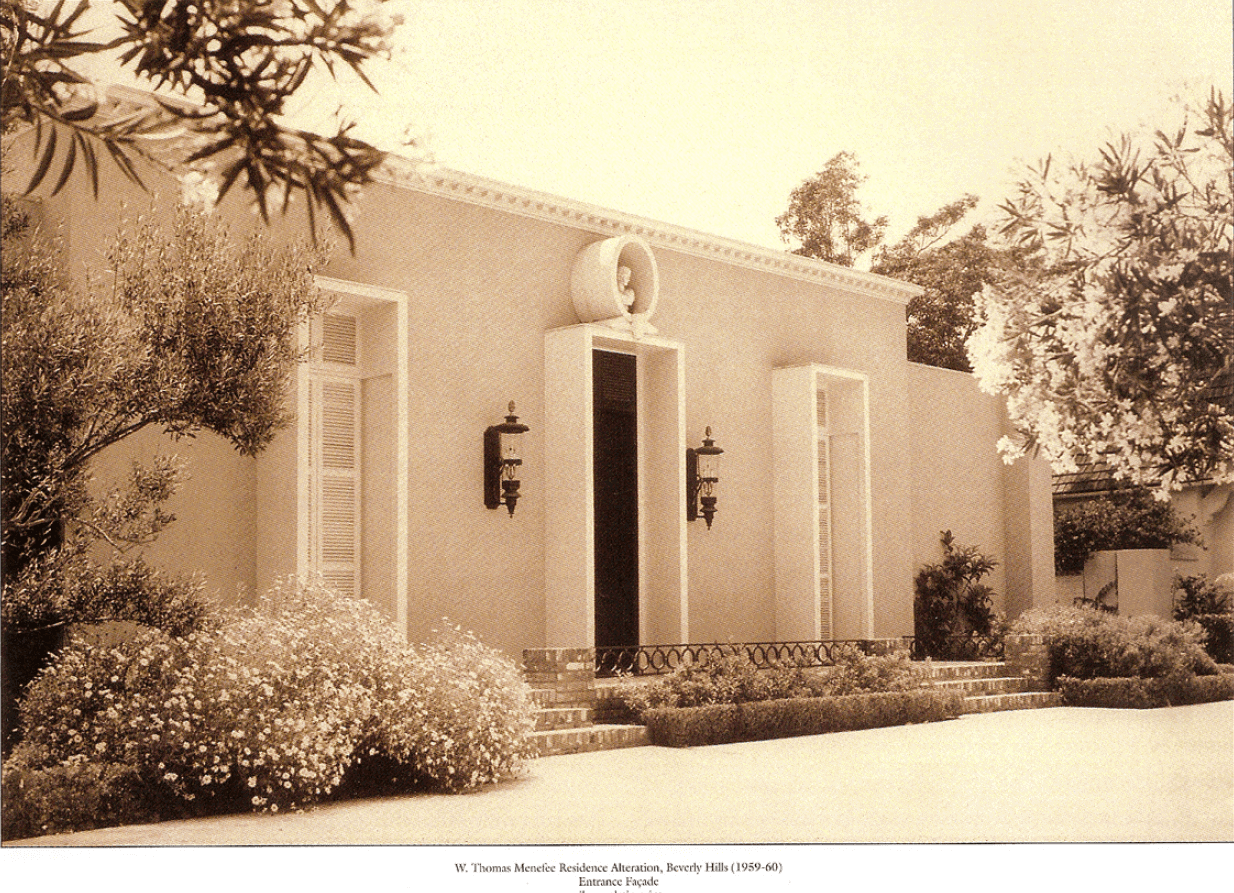 The Second most recognizable feature of Hollywood Regency is the Mansard Roof. Woolf used a simplified version of the mansard roof characterized by a single pitch- that sometimes included dormers. Irving Marx was Woolf’s sheet metal contractor and installed the Mansards on Woolf’s jobs. 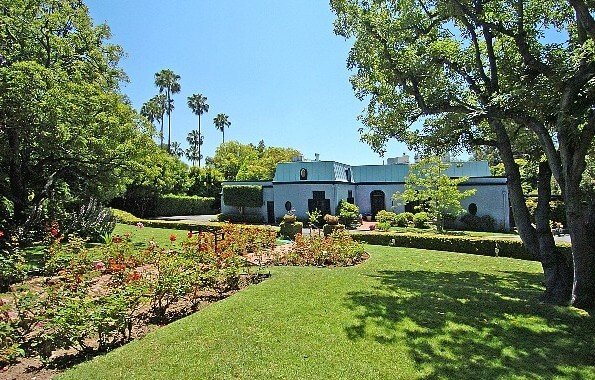 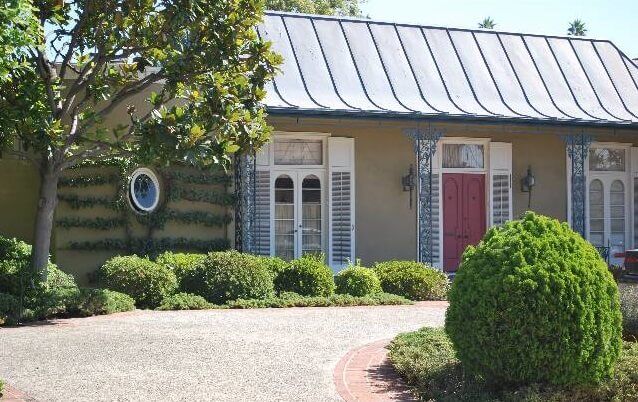 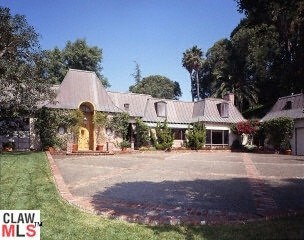 Woolf, in following with classical design principals, made his designs symmetrical. He also utilized period revival motifs such as ionic columns, the mansard roof, finials, pediments,

Woolf really loved to use two elliptical windows to flank either side of the pullman door. Sometimes a sculpture or urn would be placed inside of an oval eyelit if they weren’t windows (which you can see on the Pendelton House). If Windows weren’t used, then Lanterns were put in their place instead. 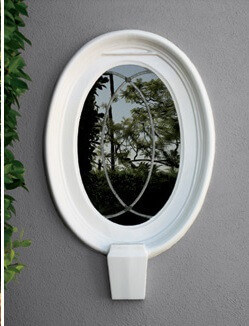 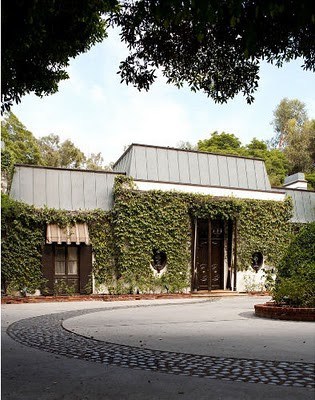 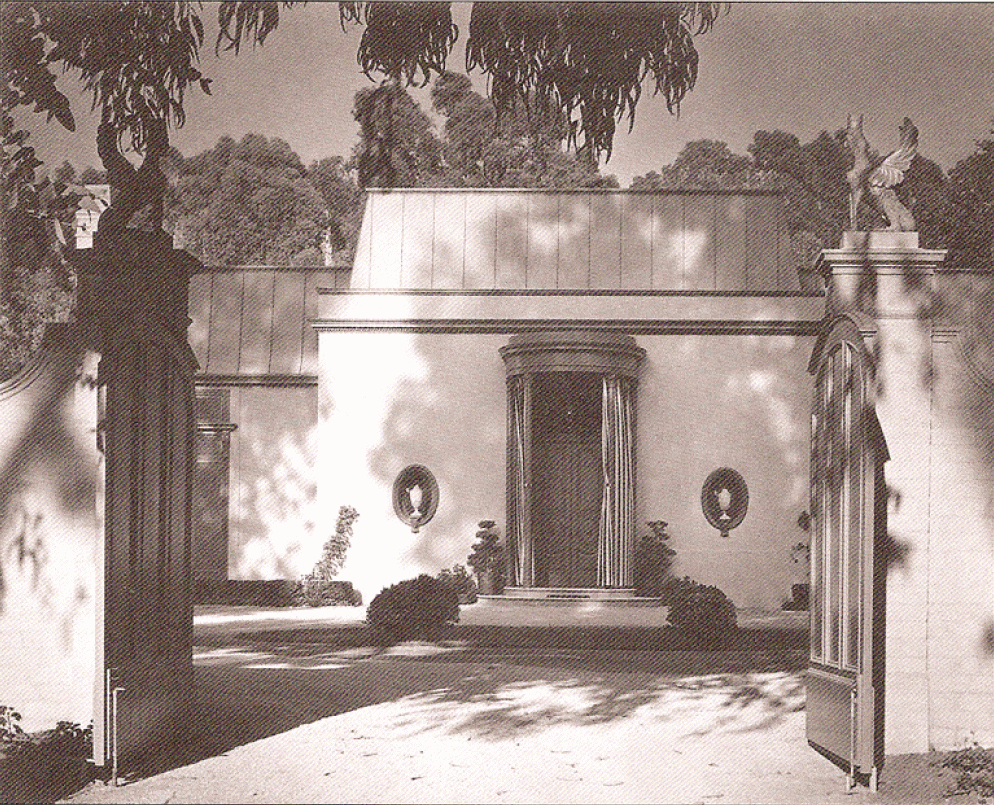 Pendleton Residence has urns placed in the oval niches

John Woolf loved pool pavilions. The pool was the center of his outdoor entertaining area plan and it was usually buttressed by a pool house or pavilion. 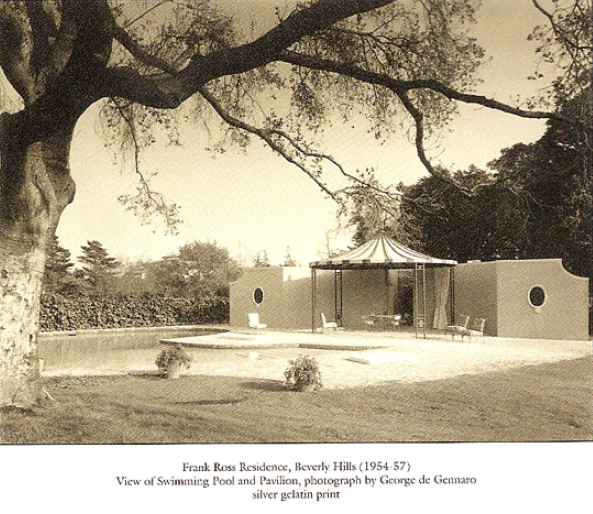 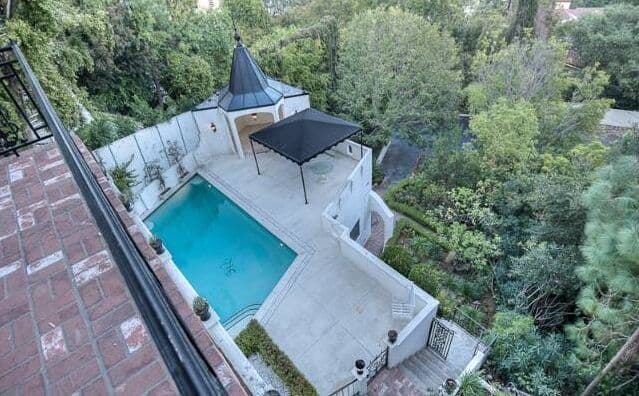 John Elgin Woolf created the illusion of a floating fireplace by putting a glass window directly above the mantel and firebox- where a brick chimney flue would usually be. 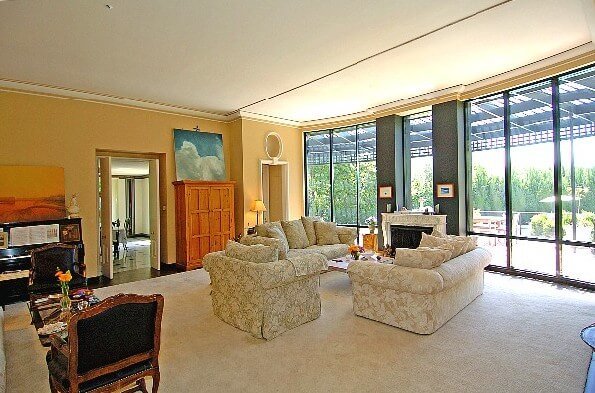 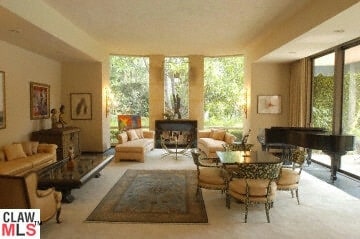 John Elgin Woolf (called Jack by his friends) moved to Los Angeles in 1936, like many young Hollywood Hopefuls, to become a movie star. He figured that being born in the South, he was a shoe in for the new film Gone With the Wind. Unfortunately Jack didn’t get the part, but in the process he met the movie’s director, prominent Hollywood mogul George Cukor, who threw lavish parties every week with a star-studded guest list with the likes of Somerset Maugham, Katharine Hepburn, Greta Garbo, and Mae West.   Woolf’s charming southern manner made him well-liked and gained him many friends. Woolf became a regular at Cuckor’s weekly Hollywood parties. He frequently accompanied comedian Fanny Brice as her beau (even though Woolf was gay). Fanny gave Woolf his first big break when she hired him to design for her a small English Georgian-style guest house for her massive mansion at 312 Faring. The Guesthouse came out great (still there today but overshadowed by a newly constructed Pool/pool house by Ferguson & Shamanian) and the project led to a number of other entertainment industry commissions including a Georgian remodel for Ira Gershwin and another for Manhattan socialite Hugh Chisholm. Before long Woolf’s client list looked like a Who’s Who in entertainment. The Motion Picture industry was drawn to his whimsical designs.

Woolf Opened up his Melrose Pl office in 1947. This would turn out to be a great boon for him because it is there that he met his future partner. John is celebrated for his talents with Architecture, but as a business man- he struggled to manage his financial affairs. Robert Koch was an interior designer working for a shop across the street on Melrose. Robert was a native of Temple, Texas, and so maybe that southern connection between Jack and Robert was part of the reason they hit it off. Soon, Robert Koch and John Woolf were attending George Cuckor’s parties every week together, and then they became an item. 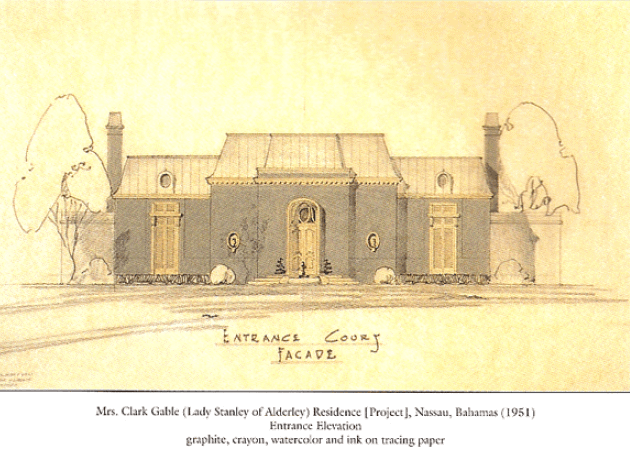 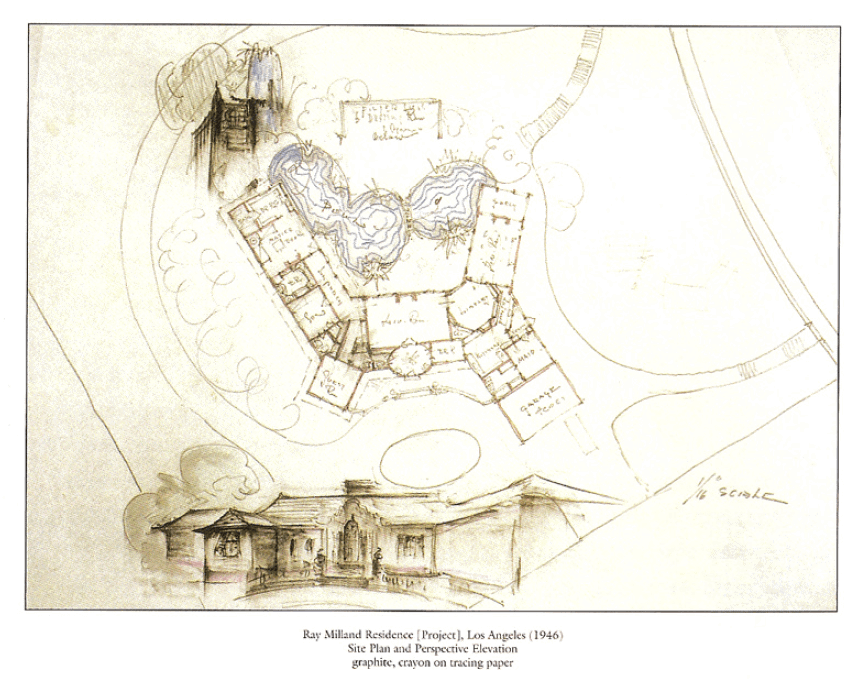 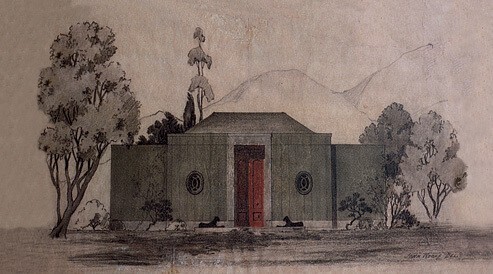 Woolf would dazzle perspective clients at meetings with his beautiful water color paintings and sketches of his design ideas for their dream home, while Robert would make sure and secure the deposit check. The two were a great team- John concentrating on designing elegant houses and Robert handling the interiors. It was Robert’s shrewd business acumen that enabled Woolf’s practice to take off.

Perhaps, the most famous Woolf house was a house that he remodeled for himself- Case Study House No. 17, built in 1955 by Craig Ellwood. 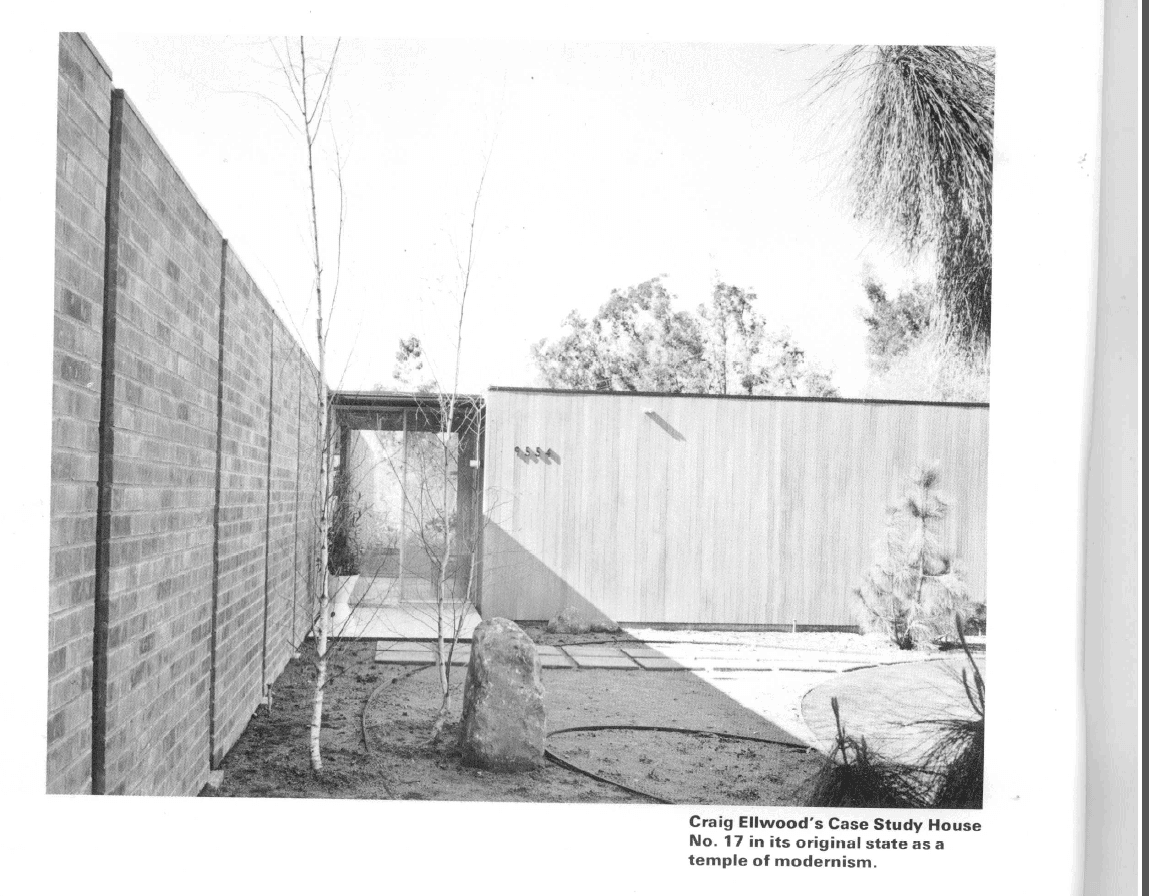 It was one of the largest case study houses. John Elgin Woolf disliked the the look of it and completely re-did the steel and glass modern as a roman pavilion! 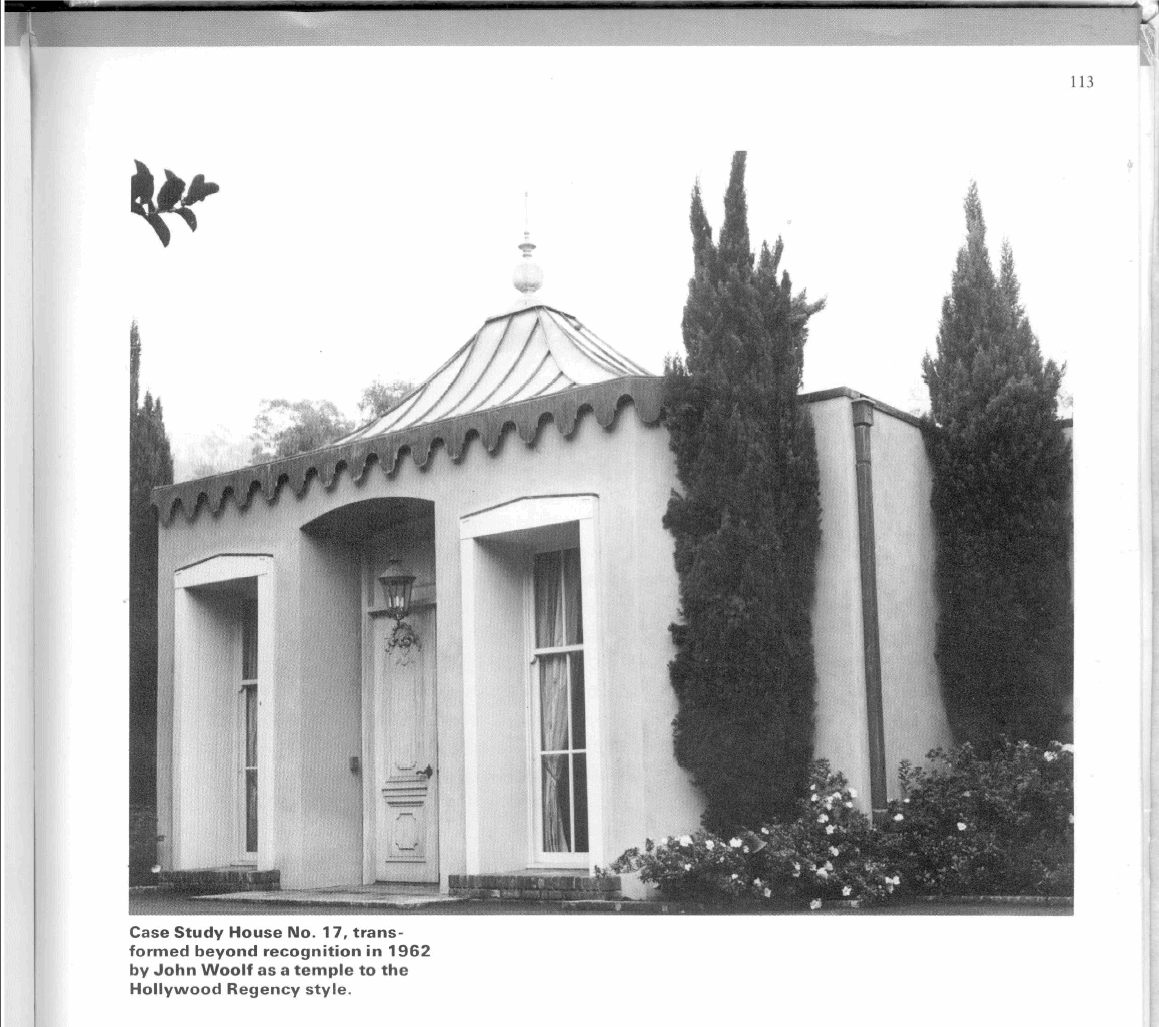 He enlarged the living room, completely rebuilt the kitchen and rearranged the bedrooms. To ornament the outdoor swimming pool, Woolf created a Doric Collonade to enclose the space and give it the romantic quality of a roman atrium. Many people who adore mid century modern were upset and considered John Elgin Woolf’s remodel a defamation.