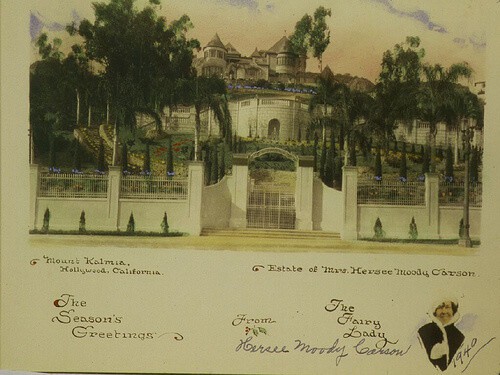 Hersee Moody Carson did marrying ‘up’ better than anyone Hollywood has ever known. She was an eccentric character, who loved to write rhyme and donated her entire fortune to underprivileged children. Strangely for someone so passionate about children, and having been married four times- Hersee never had children of her own.

Hersee, an only child born to well to do parents, started her career as a schoolteacher in Louisiana. By the time she was 37 in 1915, she had already been married twice. She moved west and came to Los Angeles and took what savings she had and invested in real estate. A quick successful real estate deal made her moderately rich.

In 1924, Hersee married wealthy Beverly Hills businessman Peter Gross. Peter already had 11 children by two previous wives. They were only married for seven weeks before Gross shot himself on the living room coach. Gross was having an affair with his housekeeper who was blackmailing him for $150,000. He left a suicide note that read “Good-bye everyone. Death is a treat.” Hersee inherited a large sum as a result of this marriage.

Hersee next married George Campbell Carson in 1927. Carson was a hillbilly inventor who had become an overnight celebrity after winning a 19 year legal battle with Anaconda mining Co. and several other copper mining companies. The companies were infringing on his patent, Carson invented in 1906 the side-charge hopper that revolutionized ore processing. Carson was awarded by the courts $20 million! ($250,000,000 in today’s dollars). A local newspaper headline read “Justice Pours $20 Million From Copper Firm’s Tills Into Hands of ‘Desert Rat,’. 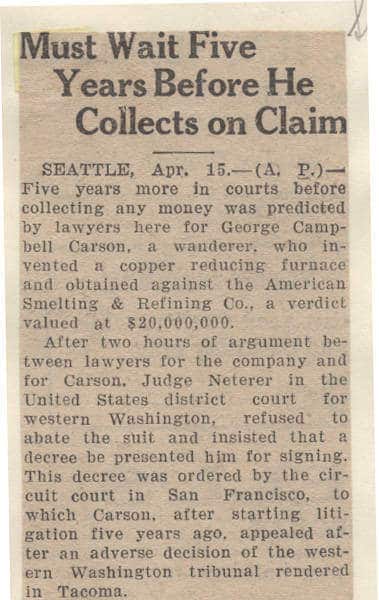 Carson was a 55 year old bachelor who had a second grade education and had spent the past 30 years mining and wandering around in the country. The two were married in San Fransico. The newly weds moved back to Los Angeles. Hersee was impeccably dressed society girl; Carson wore a beat-up straw hat and overalls and liked to sleep outside ‘neath the stars’. Carson often urnitated in public.

Carson had a very hot temper. Hersee, so disturbed with Carson’s outburst, filed papers to have Carson declared insane! Carson was committed to an asylum. But when letters for Carson came in from women all over the US and Europe trying to lure him away, Hersee and him reconciled.

The money started rolling in from the lawsuit winnings and Hersee went on a spending spree buying expensive antiques and art.

Hersee held her first Christmas party for hundreds of orphaned and disadvantaged children, mostly of Chinese descent. Hersee had an especially soft spot for foreign children. Her Chinese cook donned a Santa Claus suit and handed out presents. The dessert at these parties was always a huge angel-food cake shaped and decorated as the Holy Bible.
In the midst of the great depression in 1931, Hersee began building a medieval stone Normandy castle on a four acre eucalyptus grove on the 8300 block north of Sunset.

She named it Kalmia after the mountain laurel a native flower from the Eastern United States. 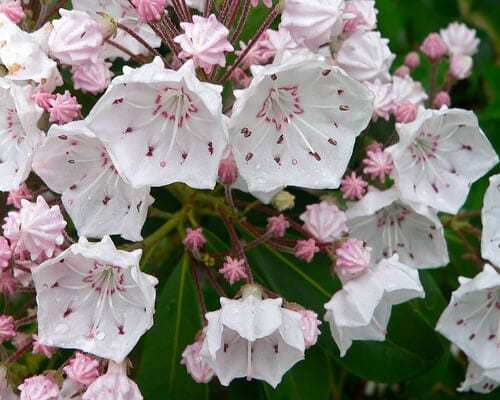 She hired 100 workers to build the three-story 7,500 sqft castle which she designed herself making changes as she went a long (much like William Randolf Hearst and Hearst Castle). No expense was spared- 125 stain glass windows, hand painted wall paper with pastel colored birds, an underground conveyor belt from the street to the kitchen for deliveries, a bathtub shaped like an Indian canoe to pay homage to a Hiawatha poem, one of her favorites. Battlements and rounded turrets. Towers. There was a music room, solarium, library, reading-room, coffee-room, nursery, billiard-room, original Louis XVI drawing room, original Hepplewhite dinning hall, and elaborate maids and chauffeur quarters. There is a three-story winding stairciase. Hand-carved wood work. Later on, when her Chinese cook grew homesick, she commissioned a painting of the Chinese emperor, which she hung over the stove. The castle cost a whopping $500,000 to build.

Hersee and Carson divorced shortly after the castle was finished. They lived there together for only several months. Carson died the next year. He had cut Hersee out of the will. Hersee sued and ended up settling with Carson’s family: six brothers and 15 nieces and nephews in total.

The house became known as the Castle of the Fairy Lady and Hersee as the Fairy Lady. Children from all over wrote her hundreds of letters each year asking for help. Her gifts ranged from grocieries, to pianos to flying lessons. She continued to through big parties for children during the holidays.

Hersee continued her philanthropy, patronizing the arts and planting trees throughout the city. She gave until she had nothing left. Eventually, she retired to Orange County, where she died in 1972 at age 93.

In 1943, the city of Los Angeles bought the castle for delinquent property taxes amounting to $9,000. A former burlesque dancer named Patricia Hogan leased it with her daughter, Tootsie Berry, who turned it into a boarding house.

The city and county subdivided the land, reducing the castle grounds to 2 1/2 acres. In 1946, dentist Manuel H. Haig bought it for $83,000 at auction. But Hogan refused to leave. Sheriff’s deputies ushered her out in 1947, along with her 38 renters. One of them was Roger Price, a gag writer for Bob Hope, The Times reported.

Haig moved in and lived there until his death in 1970.

Other owners and occupants of the castle have included Motown hit maker Barry Gordy, Noah Dietrich, the man Howard Hughes hired to oversee his movie-making empire, and flamboyant divorce lawyer Marvin Mitchelson, who bought it for $1 million in 1980, then later lost it in backruptcy after being convicted of tax faud. 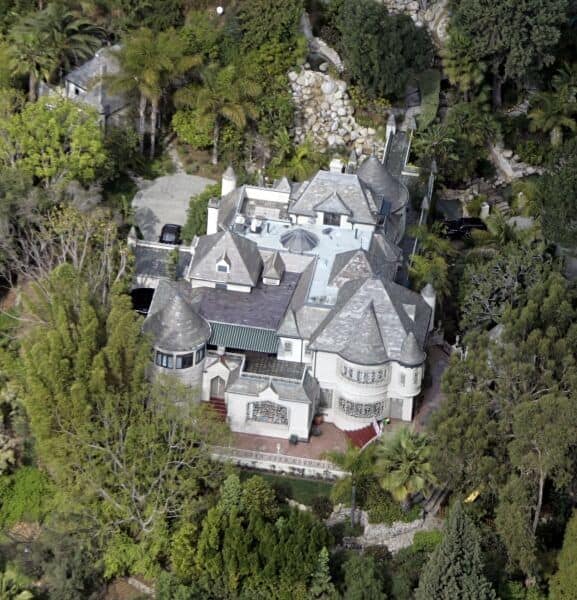 The castle is now celebrity owned. The current owner bought it in 1995 for $2.2 million 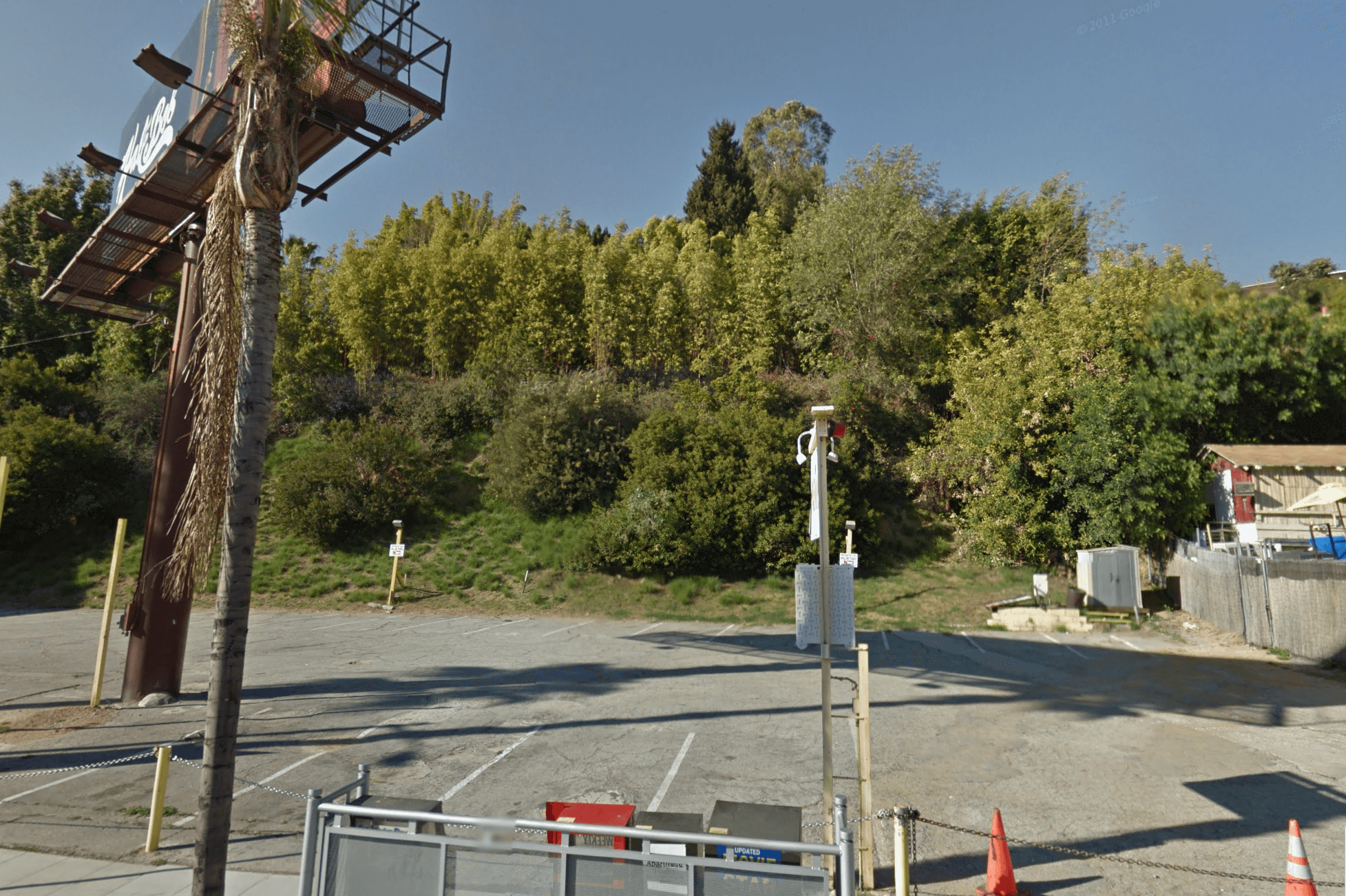 The gate from Sunset is now obstructed from view by thick foliage and the Sweetzer entrance (originally the servant’s entrance) is used.
Have contact with James