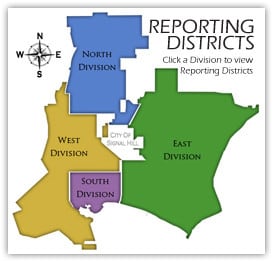 The City of Long Beach publishes crime report and crime statistic data on its website. The report is a data table organized by district numbers- each square block of the city has been given a district number. Figure 1 from above is the Reporting Districts Image located the crime statistics page of Longbeach.gov. Click the division (North, East, South or West)and the division map will open and from that map you will be able to determine what district number the area you are interested is.

This crime map is not interactive so looking up the data for the specific district can be a pain- you have to open each month in a year and tabulate the different crimes in the district. I wouldn’t go to such great lengths- the main thing that is important to see is how many violent crimes are going on within the district. The report is classified into Crimes against persons (Murder, Manslaughter, Forced Rape, Robbery, and Aggravated Assualt) and Crimes against property (Reidential and commercial burglary, Grand Theft Auto, Petty Theft, Bicycle Theft, Auto Theft, Arson).

In Long Beach the further east or south you go the better it generally gets. Parts of Northern Long Beach are rough. The Area close to the Long Beach Aquarium of the Pacific, and Downtown Long Beach, in the Southern Division has a high number of crimes.