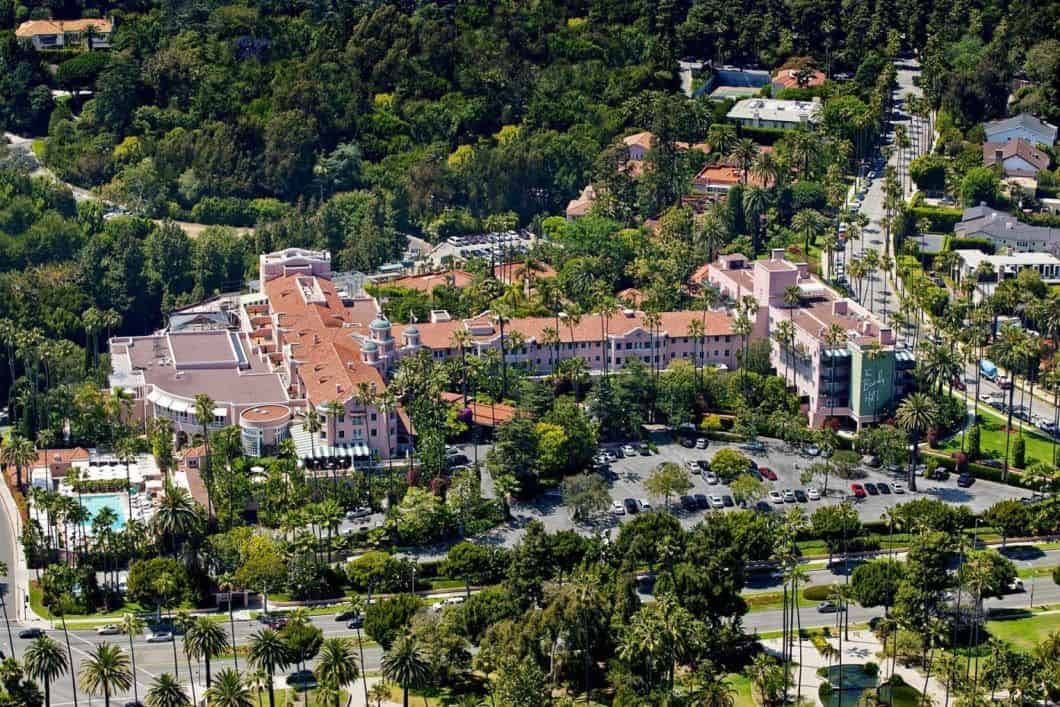 The Beverly Hills Hotel is shrouded by dense gardens and palm trees on its 12-acre lot located in the heart of the residential estate section of Beverly Hills. The hotel is one of the first buildings to be built in the city of Beverly Hills in 1912- which was before the city was incorporated in 1915 (it’s Beverly Hills Historic Landmark #1).

Designed by architect Elmer Grey in the Spanish Mission style, and added onto several times over the years, it’s 3 bell towers over the red carpet main lobby entrance proudly wave the US, State of California and Mexican flags and can be seen from Sunset Blvd below.

One thing you will notice right away is the Beverly Hotel’s signature Pink color. The Hotel wasn’t always Pink, it was originally white which is more in keeping in line with the Spanish Mission-style architecture. The pink happened in 1948 when the Louisiana Inspired Crescent Addition was added by Paul Williams.

Lovingly nicknamed the Pink Palace (a moniker given by George Christy of the Hollywood Reporter), the Beverly Hills Hotel today serves as the social center for the community of Beverly Hills, and its own unique brand of personalized service to travelers the world over as their home away from home.

The Guest book of the Beverly Hills Hotel reads like a who’s who of the 20th century- Marylin Monroe, Charlie Chaplin, John F Kennedy, Prince Phillip, Howard Hughes, Katharine Hepburn (an avid tennis player. She played tennis with the tennis pro every morning), Elizabeth Taylor (and six of her eight husbands- each one stayed in a different bungalow). The Beverly Hills Hotel has been continuously open since 1912 to the present day, except for a period of closure during the great depression, and a 2-year remodeling in 1992. The Beverly Hills Hotel hosted fundraisers for war bonds during WW2 and has introduced people the world over to the city of Beverly Hills.

The Beverly Hills hotel is marked by its personal service (you can request a butler if you want one). The Hotel staff outnumber the guests by a ratio of about 1.5 to 1. They make you feel like royalty, even if you are not royalty. The staff maintains the upmost discretion – not easy to do with so many legendary happenings all around.

The Beverly Hills Hotel is a home fit for kings and queens, heads of states, captains of industry, playground of the rich and famous, hitching post to local Beverly Hills residents, location of candid hotel interviews, clandestine rendezvous, and photoshoots. I’d say this is the most famous hotel in Los Angeles!

The oilmen had a problem, they had paid oil field prices for lima bean land, and when they found no oil (except for a small well by Beverly Hills Highschool), they revamped their idea to sell land for a real estate development. Sales were slow at first (I know it is hard to imagine now!). Only a handful of lots had sold in the first 5 years. At this rate, it was going to take 100 years to sell out! They had leaped way out in front of the path of development of the city of Los Angeles. It was 1906- It would take 20 years for development to reach them as the city was growing from Santa Monica Eastwards and Downtown Los Angeles Westwards and Beverly hills was right in the middle… of that time nowhere. 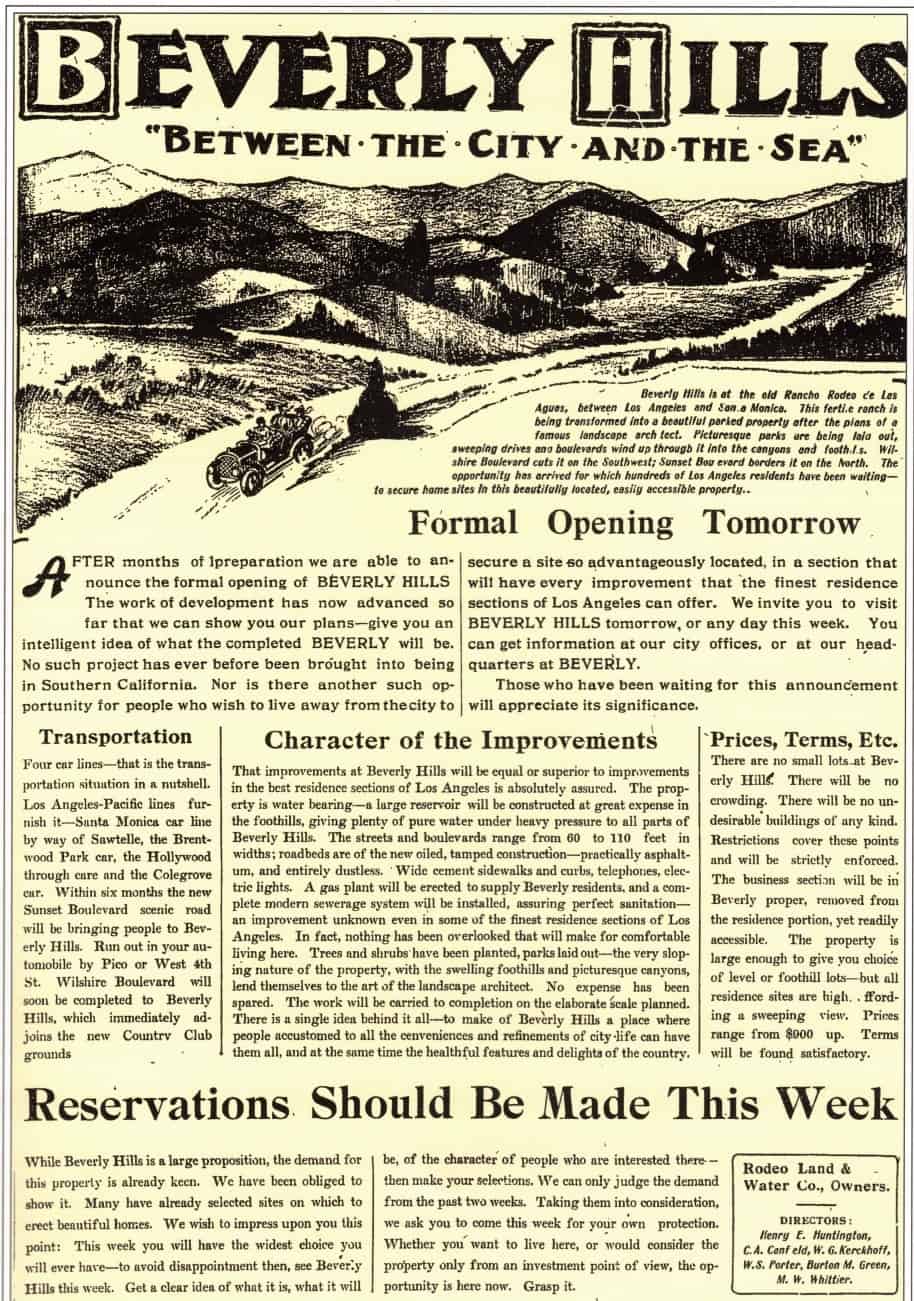 They advertised Beverly Hills as “in the middle of the city and the sea” and proudly boasted that it was just a 25-minute drive from Beverly Hills to either Downtown Los Angeles or Santa Monica beach, but unfortunately in 1910, there wasn’t anything in the middle yet.  The oilmen were making money hands over fist with their productive oil wells throughout Southern California, so money was no object. 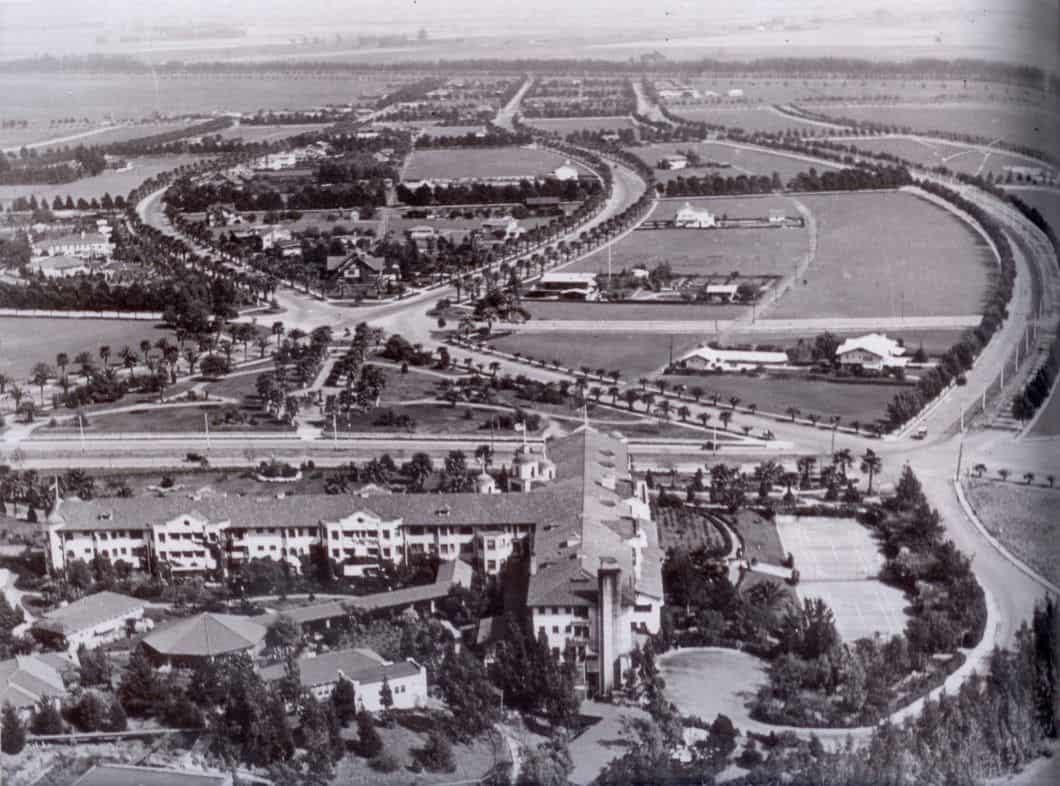 The 1920s to 1930s saw explosive growth for the city of Beverly Hills going from just 750 residents to 20,000 residents in ten years. The current day population is 34,000. Lot sales were few and far between in the 1910s. Burton Green was one of the first people to build a house- he built a humungous craftsman. 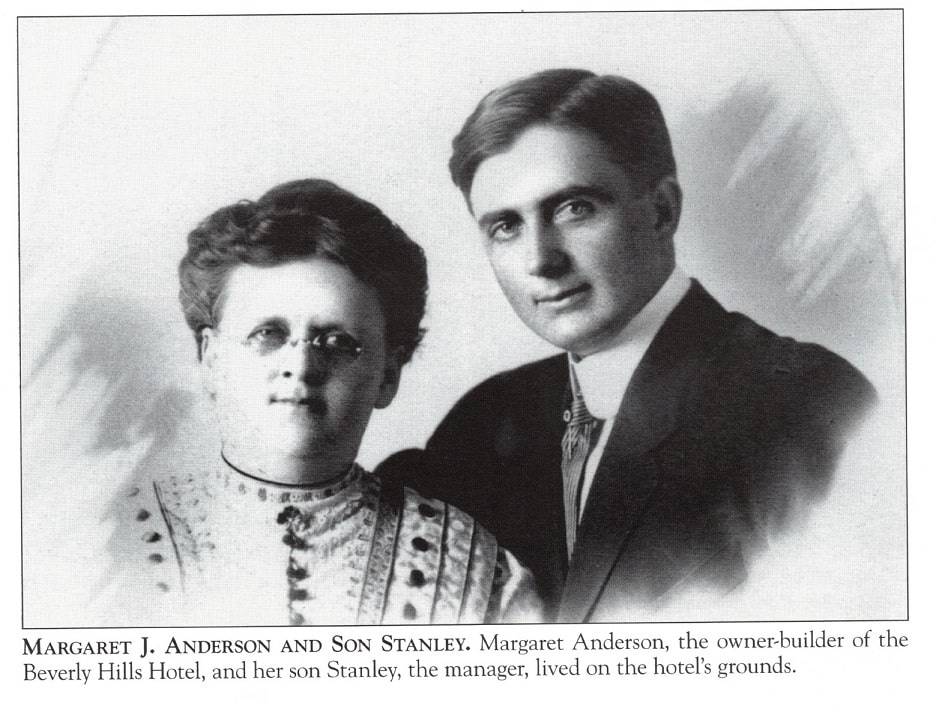 The oilmen looked to Hollywood where a rising hotelier star had grown a small 16 room hotel into a sprawling 250 room juggernaut at the Hotel Hollywood at Hollywood and Highland. They had money pouring out of their ears from their oil wells and they were anxious to reinvest it into a hotel to attract more residents to their real estate development. They struck a deal with the hotel manager Margaret J Anderson to operate their new hotel. Construction finished in 1912 at an obscene cost of between $300,000 to $500,000 by local newspaper estimates. It was instantly the largest hotel in the city with 300 rooms. The hotel was an instant success, and in the 1920s brought a new wave of Hollywood Silver Screen actors like Clark Gable, Charly Chaplin, Mary Pickford and Douglas Fairbanks which elevated Beverly Hills’ status as one of the most exclusive residential communities in the US.

The Fireplace in the Lobby always had a fire burning. When Central HVAC was added in the 1948 addition, the fire was put out although the fireplace is still there. At this time there were horse stables and guests would take horseback rides. This early era in the Beverly Hills Hotel’s history came to an end when Mrs. Anderson sold the Beverly Hills hotel at the top of the market right before the crash of the great depression to Chicago Hotelier Hugh Leighton for $1.5 million in 1928. When the stock market crashed, Leighton lost the hotel in foreclosure. 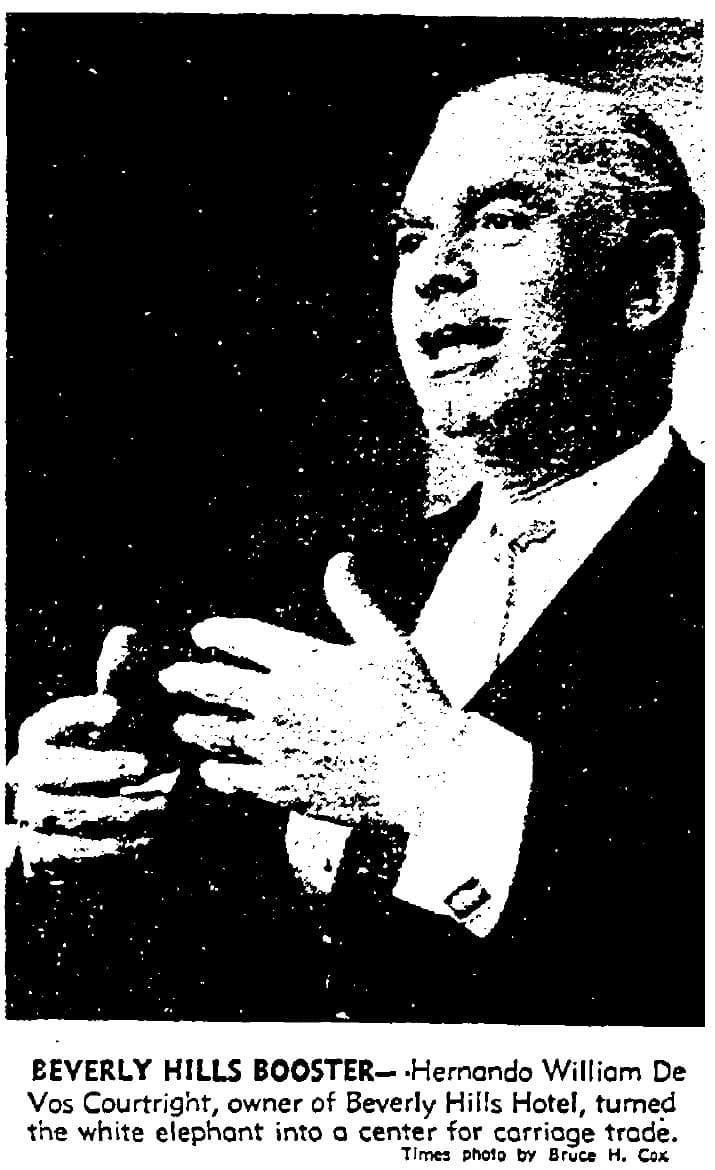 In 1934, The Bank of America put Vice President Hernando Courtright in charge of bringing the hotel out of receivership. Seven years later in 1943, Mr. Courtright formed a syndicate of investors and purchased the hotel from the Bank, so you could say Mr. Courtright came to the Beverly Hills hotel through the bank door. Courtright was a very important owner to the hotel because he set about making $5M in capital improvements to the property over the next 15 years of his ownership that greatly expanded the hotel’s footprint and brought the property into the 20th century. Courtright is the person responsible for instilling the personal service that guest receives at the Beverly Hills Hotel to this day. He had acquired his own personal views on service from years of travel and staying in hotels all over the world. He brought that sense of service to the Beverly Hills Hotel. One thing you will notice is that this hotel doesn’t do any conventions or Corporate events. Courtright’s philosophy was “Mi casa, su Casa”. He lived nearby to the hotel at 919 N Crescent.

The first expansion was adding more bungalows, of the original 14, another 7 were added. He then added the Crystal Ballroom in 1947 which can host up to 1,200 guests and has a humongous 18-foot wide crystal chandelier. Then came Courtright’s masterpiece the Crescent Wing addition in 1949. He hired renowned Los Angeles architect Paul Williams to design the addition in a New Orleans inspired. At a cost of $1,500,000- the Crescent Addition was built over the old stables grounds, which closed one chapter of the Beverly Hills Hotel’s early history and added 109 guest rooms and underground parking. All of the rooms in the Crescent Addition have French Quarter inspired wrought-iron balconies. He also reimagined Polo Lounge, Fountain Coffee Room and the lobby. Quick on the heels of this major addition was another 1.2M addition for the Glenway wing another 88 rooms.

In 1954, Courtright and his group of investors got nervous. They had always planned to sell the hotel, but with the groundbreaking of the Beverly Hilton, they worried they would lose business to the new hotel. They sold to Ben Silberstein who bought it at his daughter Muriel’s behest for 6M. Courtright’s worries never materialized as there was a brief two to the three-month lull in the hotel’s business when the Beverly Hilton opened, but the overall growth of the city sustained the additional hotel rooms. 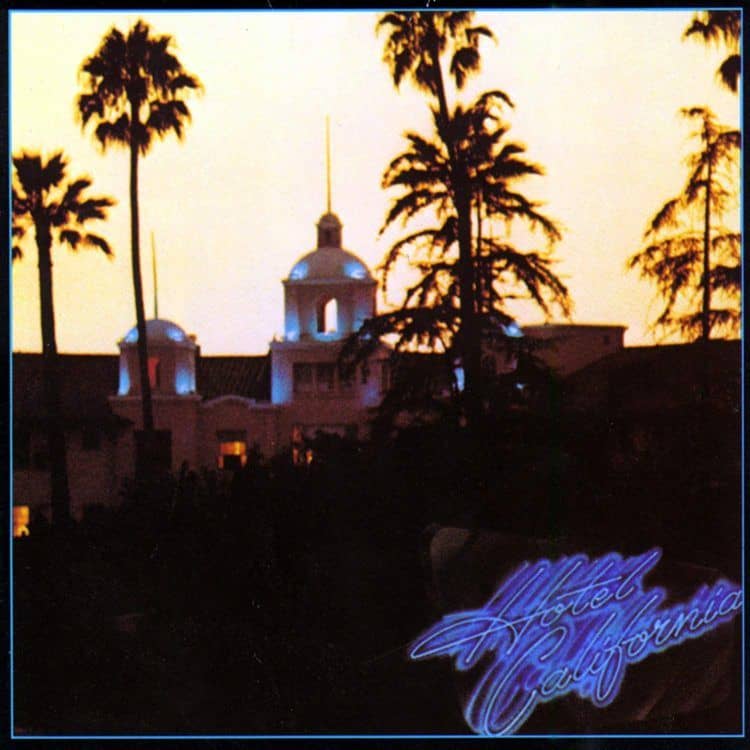 In 1976, the Eagles seminal rock album “Hotel California” was released. The album art featured a picture of the Beverly Hills Hotel at sunset.

The Silberstein family owned the hotel until 1986. The two daughters inherited the hotel but started fighting with each other and eventually sold it. This sale marked the end of this era and brings us into modern times.

The property was sold in a sealed bid auction in 1986 run by Morgan Stanley’s real estate division- the minimum bid was $100M.  Marvin Davis, Colorado Oil tycoon (he sold his Oil holdings for $180M) and Fox Chief Executive (He sold his 50% interest to Rupert Murdoch for $325M) had the winning bid at $135M- but some other notable bidders were Donald Trump, Jay A Pritzker of Chicago, local legend Merv Griffin, and The Sultan of Brunei.